North Bay theatres ring out the old and welcome in the New Year with music and comedy. The World Goes ‘Round to the beat of Broadway showtunes at Petaluma’s Cinnabar Theater while Santa Rosa’s 6th Street Playhouse is Fully Committed to bringing the laughs. Both shows run through January 5.

You’re probably more familiar with the works of the songwriting team of John Kander and Fred Ebb than you think. Responsible for the lyrics and music for Broadway hits like Cabaret and Chicago, The World Goes ‘Round is a musical revue featuring most of their best-known works.

It’s a very pleasant evening of musical theatre delivered in an intimate, cabaret-style setting via a talented ensemble that’s fully committed to entertaining their audience with delightful characterizations and terrific vocals. 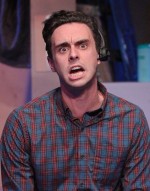 Meet Sam (Patrick Varner), a struggling New York actor whose daytime job consists of taking reservations from the hoi polloi hoping to get a good table at a New York eatery known for its “molecular gastronomy”. It’s the type of restaurant that serves “smoked cuttlefish risotto in a cloud of dry ice infused with pipe tobacco”.

Tucked in the basement, Sam juggles the reservation lines, a staff intercom, a “hot” line to the chef, and his cell phone while he engages in conversations with the crème-de-la-crème of New York society, his absent co-worker, his demanding boss, and his father who’s hoping he can come home for Christmas.

Varner is a whirling dervish as he takes on 40-some characters and gives them each a personality and a voice. It takes a bit of getting used to visually, but buy into it and it’s a fun 90 minutes.

These reviews appeared in edited versions in the North Bay Bohemian.