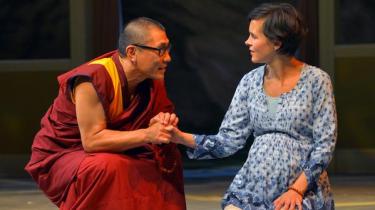 Sarah Ruhl is without doubt one of the most innovative and daring playwright’s working today, and ‘The Oldest Boy,’ despite its somewhat undercooked story and curiously bipolar point-of-view, is a good example of why theaters love staging her works, and why audiences keep showing up, even if they sometimes leave scratching their heads. Flawlessly presented by Marin Theatre Company, with meticulous direction by Jessica Thebus, the production’s single strongest draw is the artistry and jaw dropping visual beauty of the enterprise, a somewhat baffling, Zen koan-like fable about a devoted American mother (a marvelous Christine Albright) and her Tibetan chef husband (Kurt Uy, pleasantly earnest and grounded), who are informed that their three-year-old son Tenzin is the reincarnation of a revered Tibetan lama. What could be played for broad comedy (it’s not hard to imagine this set-up being employed in an Adam Sandler movie), or for some dark, melodramatic excursion into the mysteries of Tibetan Buddhism, is instead played somewhere in between drama and comedy, dancing cautiously around the edges of actual religious exploration.
Ruhl’s patented use of magical realism is on display only in her script’s straightforward acceptance of the metaphysical notion of reincarnation, which is essentially unchallenged here, taken at face-value—effectively so—and then employed as the central problem the characters this blended family must face.
The most striking bit of Sarah-Ruhl-sensibility appears in the form
of Tenzin

himself, who is portrayed by a magnificently articulated puppet. Brought to life and voiced by a team of three (puppeteers Jed Parsario and Melvign Badiola, and actor Tsering Dorjee Bawa), Tenzin is a little theatrical miracle, skipping and climbing about, eating cornflakes, and behaving like a little Tibetan Pinocchio.
He is worth the price of admission alone.
But then, I have a thing for puppets.
And I have a strong love of theater that explores the power of religion in the modern world, and Ruhl has created a situation that is ripe for powerful explorations and hard questions. Some of those questions are asked, but once one accepts the idea that Tenzin is, in fact, the reincarnated former teacher of the wise nameless lama (a brilliantly balanced Jinn S. Kim), the emphasis shifts from the deeper (and potentially darker) explorations of a religion that partially thrives on the ritual separation of children from parents, and moves into the less challenging but emotionally potent question of how a good mother could ever survive being asked to allow her toddler be taken away to serve his life as a teacher in a foreign land.

In the end, after being prepared for something truly rich and devastating, Ruhl’s script phases out of storytelling and into simple visual ritual and pageantry, wrapping things up but not ever offering a way to get to an answer to any of the questions it poses. Perhaps that’s part of the point. We Americans live in a culture that puts focus on attachment; attachment to things, to ideals, to out children. Buddhism teaches that is our attachments that bring us pain. In observing this story about a mother learning to rethink her attachment to her son, we in the audience are being asked to give up our attachment to the expected catharses and conclusions most stories give us.

That’s clever, in a way—a living illustration of this central Buddhist idea. But since have come to a theater and not a monastery, yearning for a complete theatrical experience and not (necessarily) a spiritual lesson in the pros-and-cons of Western attachment, the result in not particularly satisfying. In fact, by sending us away wondering “what was the point of that?” the power and beauty of Ruhl’s remarkable but confounding creation is done a distinct disservice.
Speaking only of my own experience, ‘The Oldest Boy’ is a play that successfully managed to open my heart wide—but then left it empty.