(This review originally appeared in the North Bay Bohemian)

Two commanding dramas—one a classic, one destined to be—are now playing in the North Bay. Each is worth discovering.

In 1948, Arthur Miller’s All My Sons became his first critical hit. Not an easy show to pull off, Miller’s ingeniously unfolding post-WWII drama gets a solid, emotionally truthful production courtesy of director Carl Hamilton and the Raven Players.
Manufacturer Joe Keller (Steve Thorpe, quite good) lost his youngest son, Larry, in the war. But because the body was never recovered, his wife, Kate (an appealingly raw Rebecca Allington), believes he’s still alive. When Joe’s other son, Chris (Jeremy Boucher, excellent), reveals he plans to marry Larry’s fiance Ann (Angela Squire), the stage is set for a family conflict with far more at stake than anyone knows.
Though casting puts certain actors in roles too old or too young for them, Hamilton’s fine direction and the generally outstanding acting make this a rich, powerful experience, with an emotional impact that does not fade away.
Rating (out of 5): ★★★★ 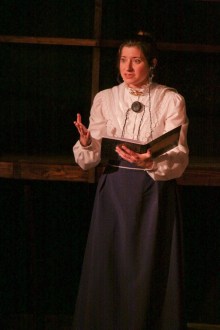 At 6th Street Playhouse, Lauren Gunderson’s enthralling and lovely Silent Sky tells the story of Henrietta Leavitt (smartly played by Jessica Headington), a pioneering astronomer whose passion for the stars puts her at odds with her devout sister (Juliet Noonan) and the male-dominated scientific community within which she worked at Harvard University.
As a “computer,” the name given to female clerks responsible for charting the skies, Leavitt initially bristles to learn that the male professors will get credit for any discoveries made by her and the other “computers” (Laura J. Davies, Maureen Studer, both excellent). Eventually, despite the confusing attentions of her male supervisor (an effectively quirky Devin McConnell), Leavitt defies authority in studying a star pattern that might contain a clue to the size and scope of the universe.
Directed with affection and humor by Lennie Dean, Gunderson’s prose is lean, inventive and captivating, turning the language of science into the stuff of poetry. There are a few moments throughout when the emotion feels forced rather than natural, but on the whole, Silent Sky is a thing of beauty, as luminous as the stars its heroine longed so deeply to understand.
Rating (out of 5): ★★★★