On April 23, William Shakespeare will have been dead for exactly four full centuries.
“This is so exciting,” says Leslie McCauley, director of Santa Rosa Junior College’s upcoming presentation of Shakespeare’s ‘Twelfth Night.’ McCauley’s enthusiasm has less to do with 400th anniversary of Shakespeare’s death than the fact that her new Shakespearean production will be staged the way its author intended—with a cast of men playing all the roles, including the women.
“It’s fun to be doing one of Shakespeare’s most popular plays, and to be doing it the way he wrote it,” says McCauley. “On top of that, we’re turning the Burbank Auditorium into the Blackfriar’s Theater, in London—complete with ‘orange girls.’ It will be very memorable.”

To honor the Shakespeare’s life and death, several North Bay theaters are staging special events.
— Beginning April 30, College of Marin will present Shakespeare’s sublime tragedy “King Lear,” in the college’s intimate Studio Theater, directed by legendary COM educator James Dunn.
— On Friday, April 22, and twice on Saturday, Napa Valley Shakespeare presents the acclaimed New York troupe Fiasco Theater Live!, performing Shakespeare’s sublime comedy-fantasy-tragedy-romance ‘Cymbeline.’ The production is stripped down and musical, and has been praised by critics for its accessibility and sense of fun.
— On Saturday, April 23, from 11:00 a.m. to 4:00 p.m., Marin Shakespeare Company will take over the Fourth Street Plaza in San Rafael for a marathon “open mike” public reading of all 154 of Shakespeare’s sonnets, read by a line-up of notable actors, and it’s free.
— From May 4-May 8, Sonoma State University presents Shakespeare’s magnificent tragedy ‘Hamlet,’ on the main stage at SSU’s Person Theater. Paul Draper will direct. The posters appear to emphasize the plays anarchic spirit and useful angst, illuminated by the youth-spirit poster slogan, ‘Rock the Power.’ 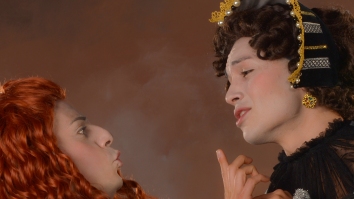 Meanwhile, in Santa Rosa and SRJC’s rehearsals of ‘Twelfth Night,’ a troupe of male actors is busily learning how to wear corsets, bum rolls and other awkward Elizabethan undergarments.
“It’s sweet revenge,” says McCauley, adding that even though the actors in this production are men, all of the production crew are women. The choice was inspired by the recent production on Broadway, which employed the same classic approach. “It was absolutely brilliant,” McCauley says. “That is how Shakespeare wrote it, and seeing it that way, with men in the roles, makes the play make more sense. It pains me to say that, because we do need more female roles for women. But Shakespeare wrote jokes into the play that don’t work as well with women playing the women.”

Further inspired by a trip to London last year, McCauley is integrating other Shakespearean elements into the production, from chandelier lighting, to music played on authentic Elizabethan instruments, to the aforementioned “orange girls.”
“’Orange girls’ were women who worked at the theaters selling nuts, oysters, and oranges, which were a delicacy,” McCauley says. “Ours will be selling chocolate-covered orange slices.
“Sadly,” she adds, “we won’t be allowing our audience to relieve themselves in the theater the way they did in Shakespeare’s time.”