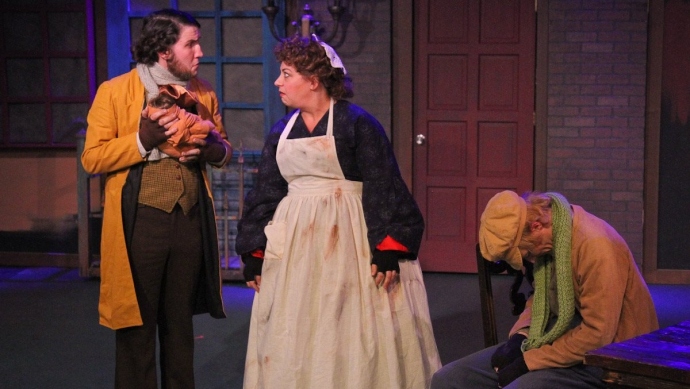 In comedy, timing is everything, and the timing is so off in 6th Street Playhouse’s Mrs. Bob Cratchit’s Wild Christmas Binge, the fact that it manages to extract any laughs from its audience is somewhat of a Christmas miracle. Plagued with pre-production challenges ranging from a change in director to the untimely passing of its lead actor (Robert Finney), director Jared Sakren and his cast have done their best to present local audiences an option for alternative holiday fun.

Christopher Durang’s musical parody of Dickens’ Christmas Carol—with detours through the worlds of Oliver Twist, The Gift of the Magi and It’s a Wonderful Life—has not aged well since its 2002 premiere. Full of political and pop-culture references that might have seemed dated even then (Enron? Leona Helmsley? TV’s Touched by an Angel?), it follows Ebenezer Scrooge (Kit Grimm) on his Christmas Eve journey through his past as guided by an incompetent ghost (Debra Harvey, alternating with Serena Flores). Their visit to the Cratchit household reveals an angry and bitter Mrs. Bob Cratchit (Tika Moon), who’s fed up with her milquetoast husband (Conor Woods), their 20 children—most of whom live in the root cellar—and her lot in life.

Soon it’s off to the pub, where she’ll knock back a few followed by a London Bridge plunge into the Thames. Scrooge and Cratchit’s fates become intertwined, as Scrooge finds himself oddly attracted to his underling’s miserable wife and Mrs. Cratchit wishes she had never been born. The show concludes with a decidedly un-Christmas-like moral: you can be poor, loving and noble, or rich, mean and happy. God bless us, everyone!

Dickens’ original story is ripe for parody, and Durang does manage to mine a few silly laughs out of it, but this show never really gets off the ground. There are hints at what Ms. Harvey might have been able to do with the lead role of the ghost with sufficient rehearsal time, but the necessity of her reading from a script played havoc with the show’s pacing. Without a strong, central performance, it was left to the supporting cast to veer out on their own and bring the laughs. The most successful of those were Moon’s bitingly sarcastic Mrs. Cratchit, Laura Levin’s ebullient, cherubic Mrs. Fezziwig and Erik Weiss’ rubber-limbed not-so-Tiny Tim.

Credit to them and the entire ensemble for gamely marching on in the hopes of producing some Christmas cheer. While the punchbowl they’re serving it from is far from full, there’s at least enough in it for a couple of glasses.

As published originally in the North Bay Bohemian