It’s been almost 85 years since two of Marin’s oldest theatre companies joined forces to present a full theatrical production. Apparently, it worked so well that the Mountain Play and the Ross Valley Players have decided to do it again. Their co-production of She Loves Me, the 1963 musical adaptation of the 1937 Hungarian play Parfumerie, runs through Dec. 22 at The Barn theatre in Ross.

The original Miklós László play is the tale of two combative co-workers who, unbeknownst to them, have been exchanging lonely-hearts letters. If that plot line sound familiar, it should. It’s the basis for Hollywood’s 1940 Jimmy Stewart/Margaret Sullivan film The Shop Around the Corner, 1949’s In the Good Old Summertime with Judy Garland and Van Johnson, and 1998’s You’ve Got Mail with Tom Hanks and Meg Ryan.

With a book by Joe Masteroff (Cabaret) and music and lyrics by Jerry Bock and Sheldon Harnick (Fiddler on the Roof), She Loves Me returns to the original play’s setting of a perfumery and its staff. Chief Clerk Georg Nowack (Max Kligman) leads a staff that includes the perpetually afraid to lose his job Ladislov (Patrick Barr), the looking for love Ilona (Chelsey Ristaino), the shop lothario Steven (Anthony Maglio), and the wanting to be more than a delivery boy Arpad (Alex Cook). Soon they’re joined by Amalia Balash (Marah Sotelo) who, much to Georg’s consternation, is hired by shop owner Mr. Maraczek (Ron Dritz) after impressing him with her salesmanship. Georg and Amalia don’t like each other very much which means, of course, they’ll be embracing by the end of the second act. 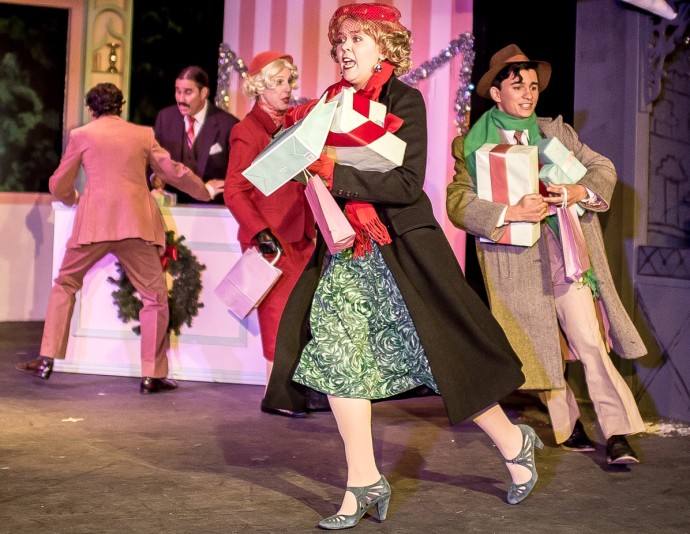 A hectic day of Christmas shopping at a Budapest perfumery.

Director Nicole Helfer and her team deliver the very definition of a pleasant show. The story is uncomplicated, the cast and their characters are (mostly) charming, and the music is agreeable and pleasing – if unmemorable when compared to Fiddler.

Budgetary constraints and venue limitations were no doubt a factor in the decision to utilize a music track – under the on-stage control of vocal director Jake Gale – in place of a live orchestra. It works fine, but the richness of live music is sorely missed as was the amplification of the vocals.

The experienced cast does well, with the energy and enthusiasm that young Mr. Cook brings to Arpad worthy of note.

There’s a Christmas connection to the story which is why it’s often programmed in the holiday season. Not quite a complete package, it makes for a nice theatrical stocking stuffer