Stephen Sondheim and Hugh Wheeler’s Sweeney Todd is an exceedingly difficult show to produce.  More opera than musical (San Francisco Opera actually did a production in 2015), the vocal demands alone create a significant casting challenge for most theatre companies. The complexities of Sondheim’s score and the requirements of the set design add to the degree of difficulty for any company seeking to produce this monster of a show.

But with two roles that are ‘bucket list’ entries for many actors, the North Bay will see three productions this season of the Demon Barber of Fleet Street’s tale. Marin’s Novato Theater Company and Theatre-at-Large have joined forces to be the first out of the gate with their co-production running in Novato through November 17.

The characters of Sweeney Todd and pie shop proprietor Mrs. Lovett have been around since 1846 and have appeared in numerous stage and film adaptations. Sondheim’s 1979 Broadway production’s headliners were Len Cariou and Angela Lansbury while Tim Burton’s 2007 film starred Johnny Depp and Helena Bonham Carter.

After exile and imprisonment, Benjamin Barker (Bruce Vieira) returns to London to seek vengeance on the villainous Judge Turpin (Charles Evans) whose machinations led to the death of Barker’s wife and separation from his daughter Johanna (Julianne Bretan) who is now the Judge’s ward. Under the name Sweeney Todd, he opens a tonsorial parlor above the bake shop of Mrs. Lovett (Alison Peltz) who admittedly makes “The Worst Pies in London”. Soon Todd’s need for vengeance and Lovett’s need for meat for her pies leads to an unholy partnership. 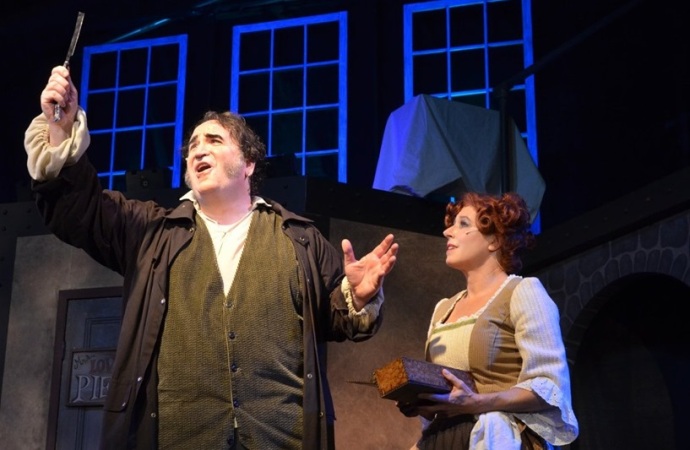 Co-directors Vieira and Kim Bromley manage to overcome most of the difficulties small theatre companies face with a production of this scope. The vocal work is excellent as is the seven-piece orchestra under the direction of Judy Weisen. The roles have been mostly well cast, though the preference for vocal ability over performance skill is evident. The leads are first-rate as is the supporting work of Dominic Quin-Harkin as rival barber Adolfo Pirelli, Fernando Siu as Pirelli’s assistant Tobias, and Jane Harrington as a beggar woman.

The villainy level of the Judge and his foppish assistant Beadle Bamford (Mauricio Suarez) is surprisingly low while the blandness level of Johanna’s suitor Anthony (Cordell Wesselink) lamentably high.

But they all can sing, and with songs that range from delightfully amusing ditties to impassioned love ballads, that’s an understandable priority.

Sweeney Todd is not a cheery show but these are not cheery times. Enjoy?