The Marin Shakespeare Company opens its 30th season with Measure for Measure. The Bard’s take on justice and mercy would seem to be a perfect fit for a company that brings their Shakespeare for Social Justice program to eight California State Prisons.

Officially labeled as a comedy, it’s considered by some to be one of Shakespeare’s ‘problem plays’ in which the situation a main character gets into is reflective of a greater societal problem. In Measure for Measure, it’s the enforcement of law with little mercy.

Judge Vincentio (Patrick Russell) cedes his authority to Judge Angelo (Joseph Patrick O’Malley) in an attempt to avoid responsibility for the strict enforcement of the law. Vincentio disguises himself as a friar so he can stick around and see what happens.

Angelo begins immediate enforcement of the laws, closing all the brothels (except those that cater to the upper crust) and imposing the death penalty on those found guilty of fornication.  Claudio (Brennan Pickman-Thoon), who has impregnated his girlfriend, soon finds himself on death row. He begs his friend Lucio (Ariel Zuckerman) to get his sister Isabella (Luisa Frasconi) to leave her convent and intercede with the judge. 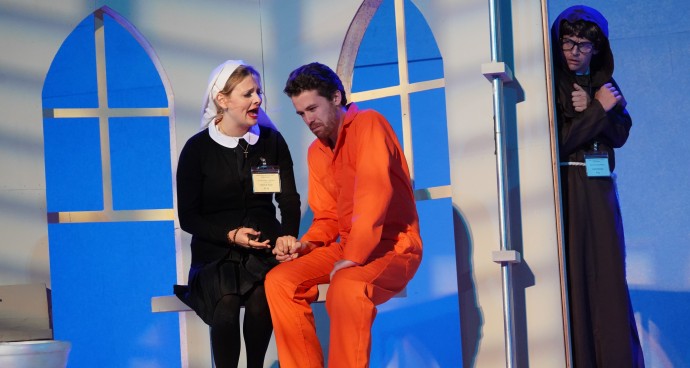 Isabella meets with the judge to plead for her brother’s life. After a day’s consideration, Angelo offers to release Claudio if Isabella gives herself to him. Isabella threatens to expose him, but the smug Angelo knows she will not be believed: “Say what you can, my false o’erweighs your true.”

Working behind the scenes to right the many wrongs in play, Vincentio puts a plan in motion to save the day.

One of Shakespeare’s lesser known and infrequently-produced works, director Robert Currier has added elements to make the play more contemporary. The set by Jackson Currier is modeled after San Quentin. The costumes by Tammy Berlin are modern. Spoken word sound-bites by LeMar “Maverick” Harrison and picket signs with social justice messages were used to bridge the scenes. Devices like these are often used to make a play more accessible, but this a case where the show was lesser (and longer than it needed to be) for some of them.

Performances ranged from the professional to the amateurish with the best work done by Russell, O’Malley (when you could hear him), Frasconi, Steven Price as advisor Escalus, and Ed Berkeley as Pompey.

Get past the directorial excesses and you’ll find a darkly comic tale of morality, hypocrisy, and law.

After all, the play’s the thing…

This review originally ran in an edited version in the Pacific Sun.