Two world premiere works by North Bay theatre artists are about to conclude their runs on local stages. Santa Rosa’s Left Edge Theatre is presenting the comedy Drumming with Anubis, while Sebastopol’s Main Stage West is hosting the musical Half Life – A Love Story. Both shows end their runs on June 30.

Middle-aged male angst is at the center of David Templeton’s latest play Drumming with Anubis. Templeton, whose prior works have been mostly autobiographical, ventures into the purely fictional here, though I suspect there’s a bit of himself in each of this comedy’s characters.

The last remaining members of the Friends of Anubis Neo-Heathen Male Bonding and Drumming Society have gathered at what one character describes as “the worst fucking campground in America” to beat their drums and honor their fallen leader. Joshua Tree, drummer for the death metal band DethDog, has been charging the men $1500 for the privilege of hanging out with him and celebrating Anubis, the Egyptian God of the dead. Even though Tree has fallen, a few diehards have shown up for what may be the final gathering.

There’s Charlie, or “Chick” (Chris Schloemp), a failed musician who turned to electrical contracting to pay the bills and stuck with it; Ray, or “Stingray” (Richard Pallaziol), a camping supply store manager and recovering alcoholic; Neil, or “Professor” (Nick Sholley), a UC Berkeley professor and ‘keeper of the rules’; and Adam, or “Bull” (Anthony Martinez), owner of a rib joint and 1/16th Native American. They’re joined by a newbie who they refer to as “New Bitch” (Mark Bradbury) who’s come fully prepared to participate in a weekend of drumming, chanting, and ritual.

All seems to be going well and according to tradition until someone reveals their true nature and all hell breaks loose. Just when the group seems to be getting a handle on the situation, an unexpected visitor shows up to further complicate things. 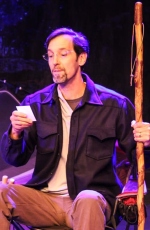 To say much more would rob potential audience members of the opportunity to discover the show for themselves, but if I haven’t made clear that this is a comedy, let me at least say that. It’s a talky (and sometimes too-talky) comedy that, while occasionally burying its humor under loud drum beating and excessive exposition, has some really funny moments.

Templeton’s affection for and interest in the historical material is clear and while I understand that drumming is to be expected from a drumming society, in both cases a little goes a long way.

Directed by David L. Yen, the show benefits from a strong cast and there’s some really good character work at play here. Richard Pallaziol garners the biggest laughs with his very conflicted and somewhat milquetoast character while Nick Sholley shows how playing ‘small’ can be just as effective as playing ‘big’ for laughs. There’s also a lot of heart in these characters as their backstories get filled in.

Click HERE for Harry’s review of Half Life – A Love Story.