Two world premiere works by North Bay theatre artists are about to conclude their runs on local stages. Sebastopol’s Main Stage West is hosting the musical Half Life – A Love Story, while Santa Rosa’s Left Edge Theatre is presenting the comedy Drumming with Anubis. Both shows end their runs on June 30.

If you’ve driven down Highway 116 between Sebastopol and Forestville you may have noticed a sign noting it as the “Willard F. Libby Memorial Highway” or perhaps you’ve enjoyed a picnic at Willard Libby Park. Who was he? Well, he was a Nobel Prize-winning chemist who worked on the Manhattan Project and developed the process of carbon dating. He was also a Sebastopol resident and graduate of Analy High School.

Director/playwright/lyricist John Shillington and composer Janis Wilson were looking for material around which to build a “celebration of Sebastopol” and decided that Libby’s and Luther Burbank’s stories might fit the bill. After workshopping the piece under the title Crossroads, they decided to cut the Burbank material and focus on Libby. Local playwright Bob Duxbury was brought aboard to help with the book and the result is Half Life – A Love Story. 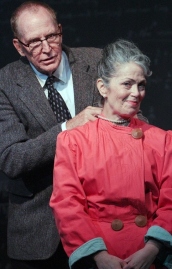 As the title indicates, this is not a “scientific” story per se, but a human one. It’s also really not a story about Willard Libby (Gene Wright) as much as it about his wife Lenore (Eileen Morris) and their evolving relationship. It uses the somewhat hackneyed device of a reporter (Stephen Leander) interviewing Libby to frame the story as we go back in time and witness the important moments in the Libbys personal and professional lives.

Libby’s story is a fascinating one. Staunchly conservative, he was also something of an environmentalist. At a time when science too often takes a backseat to politics, it’s hard to imagine anyone on the right these days exclaiming “If we don’t keep up with science, we’ll be screwed”.

The show is an odd combination of science, politics, cultural history, and human relationships which mostly works. Bits of clunky exposition come off as just that, and there are inconsistencies in the story telling. The decision to switch the show’s focus to Lenore Libby as opposed to her often off-putting husband was a good one as it gives the audience a character who can earn their empathy.

Shillington’s cast of four (including Tina Lloyd Meals as Leona Marshall, a nuclear scientist probably worthy of her own play) deliver strong characterizations and excellent vocals. Fifteen or so songs (and reprises) with cold, scientific titles that belie their true subject matter (“Chemistry”, “Heart of a Scientist”, “Fallout Shelter”, “Collateral Damage”, etc.) musically move the story forward with thematic and tonal consistency.

Even without the local connection, the lives featured in Half Life – A Love Story are well worth exploring. It’s also probably the only show you’ll ever see that shares both the formula for carbon dating and the recipe for a Betty Crocker marble cake.

Click HERE for Harry’s review of Drumming with Anubis.