One-person shows with a holiday theme tend to skew toward the male variety, whether it’s a show about a disgruntled department store Christmas elf (David Sedaris’s Santaland Diaries) or a single dad desperate to maintain the fiction of Santa Claus with his children (David Templeton’s Polar Bears). Even Dickens’s classic A Christmas Carol has been reduced to a one-man show with Scrooge.

Playwright Ginna Hoben’s the 12 Dates of Christmas is a rare female-centric holiday themed show that, despite its title, has little to do with the holiday and more to do with one woman’s experience in the dating world.  It runs in Santa Rosa’s 6th Street Playhouse’s Studio Theatre through January 6. 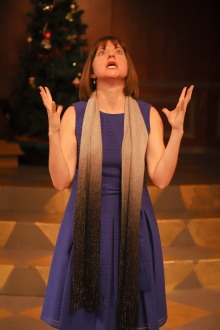 Jess Headington plays Mary, a thirty-something actress in New York, who’s getting ready to celebrate Thanksgiving with her fiancé when he calls to beg off due to food poisoning.  She’s watching the Macy’s Thanksgiving Day Parade on television, when what to her wondering eyes do appear but said fiancé nibbling on his co-worker’s ear.

No sooner is the engagement ring dropped in a Salvation Army kettle when Mary begins her own parade – of dates. We skip from holiday to holiday and follow her through a year of family set-ups, chance encounters and the occasional hook-up. Each date is represented by an ornament Mary hangs on her Christmas tree.

There’s a doctor who’s too good to be true, a bartender who forces Mary to break one of her personal rules (never date anyone with an ass smaller than your own), a stalker, a guy who offers her a steady job, a co-worker, an old friend, and even the ex-fiancé. Some dates are better than others. She turns down some guys who call back. She waits for a call from a guy who never does.  A year later, she’s still single, but seems content with her choices and has moved on, continuing to build her life, whether there’s another person in it or not.

Headington is a talented performer and engages the audience from the get-go. Her Mary is a fully-formed character, neither perfect nor a walking disaster. She owns her choices, recognizes the bad ones she makes, revels in the good ones, and keeps plowing forward through the ups-and-downs of dating with her sense of humor intact.

Mary is not the only character to take the stage, as Headington takes on the roles of her mother, her busy-body aunt, her perfect sister, her various dates and about a half-dozen other characters who enter the scene.  She does a good job making the characters distinctive and recognizable, either through vocal choices or physicality.

Director Juliet Noonan keeps Mary on the move and brings the show in at about 90 minutes with an intermission. She utilizes the entire black box space and even has Mary come into the audience. Headington’s goodwill prevents these moments from becoming too intrusive. The closing moments of both acts need to be defined a bit more, though. It’s never good when an audience isn’t sure whether a show is over or not.

The dating world is often a fertile field for comedy. Headington and the 12 Dates of Christmas do a pretty good job of harvesting that field for good-natured laughs.