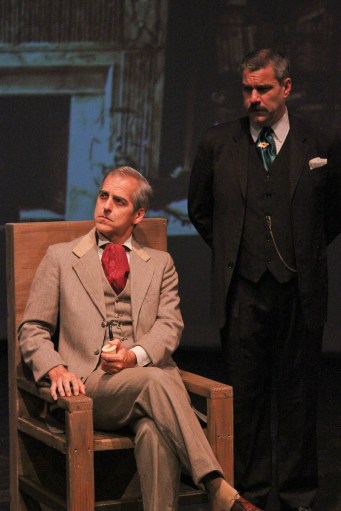 Some was written and published, some began as the stuff of urban legend before being translated for the stage or to the cheap and popular ‘penny dreadful’ magazines that were filled with stories of the macabre, the sensational, the bloody, the mysterious.

And gruesome tales like that of Sweeney Todd and Mrs. Lovett, they were retold in increasingly outrageous and shocking ways. Continuing the trend of transforming gruesome Victorian potboilers into new forms of entertainment, two of the best tales from this era are currently running at two different Sonoma County theaters.

Baskerville—running for one more weekend at Spreckels Performing Arts Center—is Ken Ludwig’s ultra-spoofy take on Arthur Conan Doyle’s Hound of the Baskervilles, one of Sherlock Holmes most popular adventures.

Directed by David Yen, who demonstrates an obvious affection for Monty Python and the Airplane films, Baskerville follows Holmes and Watson—played by Stephen Cannon and Chris Schloemp, respectively—as they take on the case of a wealthy man killed on the moors by a mysterious beast. As written by Ludwig, the play is jam-packed with pratfalls, outrageous accents, crazy characters, and silly walks. Yen stages such stuff brilliantly, and adds a number of wacky bits of his own, including a massive cloud of machine-made fog that seems to have a mind of its own.

Trust me, if you sit in the front row, you’re gonna get fogged.

The cast of five is mostly excellent.

Though Cannon’s ultra-dry delivery as Holmes reads as lifeless and unfunny much of the time, the rest of the cast is a brisk and bouncy delight. Especially Larry Williams, excelling in an array of wildly over-the-top roles. Watching him tumble down stairs is a hilarious hoot. Kim Williams and Zane Walters do exceptional work as well, playing numerous potential murderers and/or victims. The best performance in the show, though—thanks to Williams’ utter commitment to the moment—is from the floppy stuffed-animal appearing as the mysterious Hound itself.

Rarely has an inanimate object been funnier.

If only “Sweeney Todd,” now p;aying at the Raven Theater in Healdsburg, had had same level of energy.

Though featuring one of the best orchestras I’ve ever heard in the North Bay—with expert musical direction from Lucas Sherman—Stephen Sodheim’s spirited, darkly fun tale of murder and cannibalism feels disappointingly stiff and dour. Directed by Carl Hamilton—who delivered one of 2015’s best shows in All My Sons—this Sweeney is dealt a mortal blow by stiff and constricted, overly presentational staging that, despite several nice visual touches—I loved the falling red fabric when key characters die—often feels flat and frozen.

A bit more melodramatic vitality and dynamism is called for in this kind of show.

IT might be dark and bloody, but it should also be larger-than-life, over the top, melodramatic … and maybe even fun.

As Todd, Matt Witthaus cuts a fine figure, and reveals a powerful singing voice—put this man in more musicals—but the dark intensity of presence for which Witthaus has become known is rarely capitalized on in this production. Far more lively and on-the-mark is Tika Moon as the pie-making Mrs. Lovett, balancing her characters’ dark humor and comic tragedy with masterful ingenuity.

The Raven’s Sweeney Todd certainly has its moments.

Too bad it doesn’t have more of them.