“Growing up, I was always interested in ghosts and UFOs, Bigfoot and the Loch Ness monster, all of that stuff,” says filmmaker Tom Wyrsch, of Petaluma, writer-director of the soon-to-materialize “Haunted Sonoma County.” “But out of all of those things, ghosts always seemed the most possible. I think there’s something about the idea of ghosts, hauntings, haunted houses, that just makes sense to me.”

Not that he’s ever actually seen one.

This non-skeptical openness to the supernatural will make perfect sense to anyone who’s ever seen a Tom Wyrsch film. For the most part, his offbeat cinematic explorations do tend to display a fondness for the mysterious – from 2008’s “Watch Horror Films! Keep America Strong,” to 2010’s “Remembering Playland at the Beach,” to last year’s “Harry Houdini: Magic Among the Spirits.” 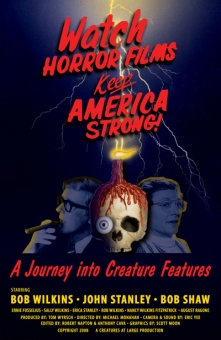 The new film – Wyrsch’s eighth in less than 10 years – is exactly what it sounds like, a tour of Sonoma County in search of spots where the hobnobbing of ghosts has been frequently reported. Several of those spots are in Sonoma, including the Sebastiani Theatre. The historic building is featured in the film, along with manager Roger Rhoten, describing the antics of Trixie, who likes to turn lights on and off, and reportedly sometimes appears as a reflection in the Ladies Room mirror.

Fittingly, “Haunted Sonoma County” will enjoy its world premiere at the Sebastiani itself, on Monday, Oct. 3, with two screenings planned and an onstage appearance by Wyrsch, who will introduce the film.

Wyrsch, 64, never expected to become a filmmaker, let alone a cinematic ghost-historian. For 27 years, he was the West Coast warehouse distribution manage for Russ Berrie Gift Company, in Petaluma. It was his friendship with celebrated ’70s horror-movie personality Bob Wilkins – host of the beloved “Creature Features” television program on KTVU – that inspired Wyrsch’s first film.

“I said to Bob one day, ‘People ask you questions all the time about “Creature Features.” You should maybe make a documentary about that, and answer of those questions in a movie.’ And Bob said, ‘Well, why don’t you do it.’ So we made the movie, and after that, I just got the bug. Two years later, I made the ‘Playland’ movie, and that was huge for me. It ran for months in San Francisco. It’s still huge.” 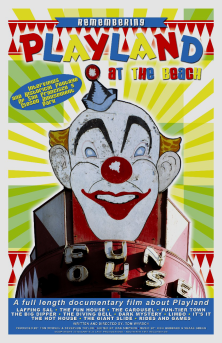 That film used archival footage and photographs to recreate memories of the long-gone amusement park.

“It had dark mystery rides,” he says, “and the famous ‘Laffing Sal’ automated character. After ‘Playland,’ I made a movie called ‘Sutro’s: The Palace at Land’s End,’ about the Sutro Baths in San Francisco. It had a little fun with the theme that some people think the ruins of the baths are haunted.” Wyrsch then made a movie about San Francisco’s Cliff House.

“So, clearly, the theme of ghosts and hauntings has been there in my films all along,” laughs Wyrsch. After completing 2015’s Houdini film – which contained historical detail on the annual Houdini séance begun by the late Petaluma journalist Bill Soberanes – Wyrsch decided to go ahead and make a film that was aimed squarely at ghosts, but with his usual focus on historical accuracy. “I went to the different places, talked to people who knew the historical background of each location, and who then told the history of the area before I went digging into stuff about the ‘haunts’ that had been reported there.”

Filming commenced last October, with a budget of $20,000. Cinematography was done by Steve Brown, with a crew of six. Onscreen narration was done by Laurie Jacobsen, the Santa Rosa author of the book “Hollywood Haunted.” According to Wyrsch, the completed 72-minute film includes some of his most ambitious and accomplished work yet, including cleverly filmed recreations of classic hauntings as described by various local legends.

“It’s a historical journey around Sonoma County to haunted locations,” he says. “In many cases, we recreate, using green screen, the ghosts people have described. We do it very tastefully.”

In addition to the Sebastiani Theatre, the film takes viewers into Sonoma’s Mountain Cemetery.

“There are a fair amount of ghosts in that cemetery,” says Wyrsch. “One of them is known as the ghost of the Tall Monk. So we talk about him. I think a lot of people are going to want to go check out the locations themselves, just to see if there’s anything there.”

Following the world premiere at the Sebastiani, Wyrsch plans to release the film on DVD in November, though his Garfield Lane Productions website. Asked if he plans to follow up with “Haunted Marin” or “Haunted Napa,” Wyrsch laughs.

“How about ‘Haunted Sonoma Part II?’” he says. “Because, let me tell you, there were a lot of really great haunted places that I missed.”

This story originally appeared in the Sonoma Index-Tribune