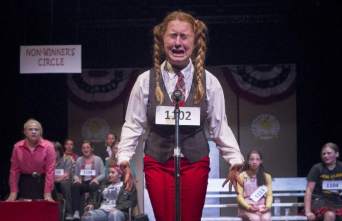 Please spell “serendipity.”
As fate would have it, not one, but two productions of the engaging musical ‘The 25th Annual Putnam County Spelling Bee’ are both opening in the North Bay this weekend, but the two shows – one in San Rafael, one in Sonoma –  couldn’t be more different. While Marin Onstage opens its Belrose Theater  production with all of the middle-school characters played by older actors (the way it was done on Broadway), Sonoma Teens ‘N Training (a program of Sonoma Arts Live, at the Sonoma Community Center) is using an all-teen cast, and has re-engineered several of the primary spellers to be female.