If your taste in musicals runs to the light, bouncy, and life-affirming, you might want to take a pass on the Spreckels Theatre Company’s latest production. If, however, your taste runs more to the dark and twisted, then you won’t find Urinetown, the Musical too draining. It runs through March 1.

Set in a dystopian future where decades of drought have led to the regulation and privatization of water intake and outtake, the show by Mark Hollman and Greg Kotis made quite a splash on Broadway in 2011 and won three of the ten Tony Awards for which it was nominated. It’s an odd combination of satire, parody, social drama, and love story.

The show opens at Amenity #9, the “poorest, filthiest urinal in town” (with appropriately dingy scenic design by Elizabeth Bazzano and Eddy Hansen) where citizens line up to pay for the privilege to pee. Failure to pay or to be caught urinating in public leads to banishment to Urinetown, a place from where no one has ever returned. 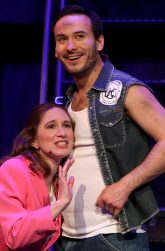 The Urine Good Company, headed by the dastardly Caldwell B. Cladwell (Tim Setzer), seeks another hike in their outrageous fees. This doesn’t sit well with Amenity attendant Bobby Strong (Joshua Bailey) who’s soon fomenting rebellion. Complications ensue when Bobby falls in love with Cladwell’s daughter Hope (Julianne Thompson Bretan). Will their love be enough to break the stranglehold her father has on everyone’s bladder? Well, as Officer Lockstock (David Yen) makes clear in his introduction, this isn’t a “happy” musical.

Actually, it’s barely a musical at all. It’s more a single-themed Forbidden Broadway-type revue with each musical number reminiscent of another show. “Look at the Sky” smells of Les Misérables, “What is Urinetown?” brings Fiddler on the Roof to mind, and “Run Freedom Run” has shades in it of Guys and Dolls and How to Succeed in Business Without Really Trying. The show’s best number may be its only non-referential one – “Don’t Be the Bunny”.

Director Jay Manley has an excellent cast at work here with toilet paper-thin characters. Bailey and Thompson Bretan bring earnest demeanors and terrific voices to their roles. Setzer clearly relishes in Cladwell’s cartoon villainy. Yen keep things whizzing by with his humorous exposition, often in tandem with Denise Elia-Yen’s Little Sally, and the show benefits from a strong ensemble. For example, David Casper, who plays hot-headed revolutionary Hot Blades Harry, is absolutely unrecognizable as Old Man Strong. I found myself thumbing through the program at intermission to see who was playing that role. With a cast this talented, it’s a shame the characters were so shallowly written.

Urinetown may leave a bad taste in the mouth of some, but if you’re in the mood for something decidedly different then, by all means, go.