Several years ago, at the informal first reading of a new play in the living room of a friend, actor-educator Danielle Caine, one of the dozen-or-so folks there to give feedback, said something to the playwright that I’ll never forget.

“Why is this a play?” she asked. “You have a story you want to tell? Great. So why isn’t it a book? Or a movie, or a poem? A story should take the form it has to take, and if this is a play, then you should know why it has to be a play and not something else.”

I was thinking about Danielle’s words a couple of weeks ago during intermission of a play I attended in Berkeley. Titled “The Flick,” and written by Annie Baker, the play (which, for the record, has been extended through Oct. 6 at Berkeley’s award-winning Shotgun Players) was pitch-perfectly directed by Jon Tracy and includes a performance by Sonoma County’s Chris Ginesi. “The Flick,” which won the Pulitzer Prize for Drama in 2014, is set in a small, run-down Massachusetts movie theater, just before the transition from 35mm film to all digital. 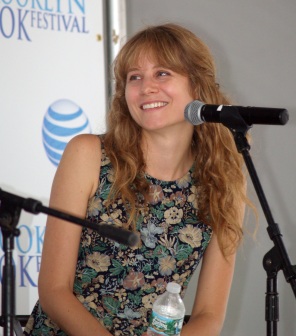 As written by Baker, a playwright who relishes the conventions and challenges of live theater, the audience is placed more-or-less where the movie screen would be. Throughout the play’s three-hour-running time (yep, three hours, including an intermission) we sit out in the dark, in our rows of seats (more like cushioned church pews at Shotgun), facing the rows and rows of movie theater seats up on the stage.

And kind of exciting.

Above the onstage theater seats we see the window of the projection room, and between scenes that projector (an actual 35mm movie projector) springs to life to shine flickering images of classic movies onto the screen. Which is the audience. Which is us. We are, in a sense, the movies themselves, passively watching the people who work at the theater, as they patiently clean up endless messes left by endless audiences. There’s something metaphorically Escher-like in it all.

My friend Dan Zastrow, who attended with me, is the Manager of the Rafael Film Center in Marin County, and at intermission, he said, with a laugh, “It feels pretty real, very very realistic. I feel like I’ve been at work instead of at a play.” Just moments later he added, “And the projector they’re using is a real 35mm projector! I could tell from the moment we sat down that was the real thing! They really did their homework to get the details right. It really does feel … well, real.”

The story itself – of how the three employees of the theater deal with minimum wage monotony, as they engage in movie trivia contests, and awkwardly attempt to connect with each other – is one of the those slow-burn tales that appears to be going nowhere until it suddenly reveals what it’s actually been doing all along. And it would never work as effectively if it weren’t a play.

Or maybe the actors are the horses, and the people … wait.

I’ve lost my train of thought.

Anyway, my point is, Danielle Caine was right. Some stories are told as novels because they have to be novels, and adapting them into a movie drastically alters what it was that made them such a good book. Some stories are told as movies because the story requires certain tools of epic, cinematic grandeur or close-up, pores-exposed intimacy that only a film can deliver.

And some plays – like Samuel Becket’s “Waiting for Godot,” or Caryl Churchill’s “Top Girls” or A.R. Gurney’s “Sylvia” – are plays because they demand to be plays, because the story wouldn’t work any other way. Because the experience of watching that story in a theater with real people on a stage – even if it doesn’t look like a stage – is part of what that play is all about.

Yes, it can be a little uncomfortable. In “The Flick,” for example, the audience was clearly a bit alarmed for the first hour or so, especially after watching two guys in polo shirts exchange no more than two dozen words while sweeping up popcorn. For 20 minutes.

As Dan said, it felt real.

And that’s what theater is supposed to do, isn’t it? Theater adds a touch of authenticity to a story by actually engaging in something real, something live, something only separated from us by air. When Peter Pan takes off, it might be done with ropes and pulleys, but that’s still a real person actually dangling from that rope. When mean Mr. Mushnik is swallowed by Audrey II in “Little Shop of Horrors,” that’s a real actor being engulfed by a giant three-dimensional puppet plant being operated by a puppeteer right in front of us.

That’s the magic of theater, in a nutshell – it feels … real.

Given that it’s also just make-believe, that’s really saying something. And that’s why a play that couldn’t be anything but a play is such a difficult and miraculous things to pull off.

And why it’s such a wonderful thing to experience.

[This piece was originally published in the Argus-Courier as part of David Templeton’s Culture Junkie column. To read the original column click here