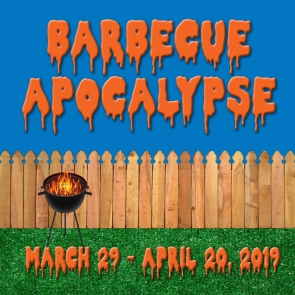 “We’re not technically drinking, I want that to be absolutely clear,” Petaluma stage director-and-actor Larry Williams pointed out, on a recent St. Patrick’s Day Sunday, as a pair of tall, colorful, impossibly sweet-looking margaritas – one blended, one on the rocks – appeared at our table. “This isn’t alcohol consumption. It’s research. Make sure you put that in your article.”

He’s absolutely right. On St. Patrick’s Day, when most folks in town were out imbibing Guinness beer and Irish coffees, Williams and I set out to find a good, cold mango margarita – a beverage neither of us had ever experienced previously – all in the name of research for the play he’s about to open at Spreckels Performing Arts Center. Titled “Barbecue Apocalypse,” and written by Matt Lyle, the darkly comedic play opens this weekend on a set designed to replicate a typical American backyard in a typical American town, before and after the beginning of a massive breakdown of civilization.

And yes, mango margaritas are part of the show.

“Basically, there’s this couple hosting a barbecue, and the only thing they can think of to serve their guests is mango margaritas,” says Williams. “Deb, played by Jess Headington, thinks mango margaritas will be impressive. I believe the comment, made by her husband Mike, is, ‘Deb has something “fruity” she wants to serve. Oh right, it’s mango margaritas!’ And of course, that announcement brings different reactions from the various other characters in the play.”

In the script, Williams says, there is no clear indication why Deb picked mangoes. Or margaritas.

“Maybe she happened to have mangoes around,” he mused, pulling his own (blended) margarita closer, giving it a wary once-over. “Of course, once the apocalypse happens, and there’s no more electricity, and probably no more ice, mango margaritas are a thing of the past. I guess if you were resilient enough and it were cold enough, you could make your own ice, somehow. And if you looted the tequila from a store or something, you could actually make your own apocalypse margaritas. Mangoes, however, you’d be hard-pressed to find, unless you were living in California.”

The second act of “Barbecue Apocalypse,” he says, takes place one year after the end-of-the-world, when the low social status they once held among their upwardly mobile friends has taken a turn. They now have something that puts them in a rare position of power: a safe spot to hunker down, complete with a defensible backyard and a working barbecue, should they find anything fresh to toss on the grill.

“So, you know, cheers,” said Williams, lifting his drink. “To our first-ever mango margaritas, and, hopefully, to surviving the apocalypse! With or without mangoes.”

For the record, said beverages were found at Petaluma’s Plaza Tequila Taqueria and Grill, on Washington Street. Their extensive bar menu includes a wide variety of margarita options. And even on St. Patrick’s Day, the place was packed.

“What a pretty drink,” Williams said, after taking his first sip and proclaiming it “Actually pretty good!” He admits to being a “fruit-friendly guy, when it comes to my alcoholic drinks,” and therefore not as averse to the idea of such a frivolous concoction as the others in the play. Those others, by the way, are portrayed by actors Sam Coughlin (Mike), plus J.T. Harper, Trevor Hoffmann, Lyndsey Sivalingam, Matthew T. Witthaus and Petaluma’s own Katie Kelley.

“I think,” continued Williams, “it’s the prettiness of a mango margarita that is why it’s being made in the show. It becomes a symbol of impressing people as much as you can using as little as possible.”

The play, which Williams says is frequently hilarious, uses the idea of civilization’s collapse to examine the social structures and statuses we adhere to, based on certain assumptions of what’s important and what isn’t.

“Needless to say, everything flip-flops, once the world changes so drastically,” Williams said. “This is one of those plays where you tend to laugh ten-seconds after a joke is made, as it slowly sinks in what just happened. Then you’re sitting there going, ‘Oh my god, I can’t believe someone just said that.’ It’s a pretty crazy show. I hear it’s been very popular in Texas.”

Having been working on “Barbecue Apocalypse” for a while now, it’s no surprise that Williams has been doing a lot of thinking about the possible demise of the world.

“It’s funny. I’ve always liked apocalypse movies,” he admitted. “One of the first was ‘Planet of the Apes,’ and then there was ‘The Omega Man,’ and of course ‘Soylent Green.’ That was a very dark vision of the future, but it captured my attention a lot when I was younger. Right now, I think the reason we are seeing so many post-apocalyptic movies and TV shows, and obviously also plays, is that the current political and social environment has us all a bit on edge. We’ve become so divided. It’s legitimately frightening to see what’s happening in the world and in our country. So I think watching these kinds of stories sort of gives us a way to examine what’s scaring, us without becoming too freaked out about it. We watch a zombie show, or something about a totalitarian future, and it’s okay, because for now, it’s still just fiction.”

One interesting side-effect of Williams’ foray into an end-of-the-world mindset is as practical as it is whimsical.

“I’ve been developing an apocalypse playlist,” he said, “complete with YouTube links for each song. Not that I’d be watching YouTube in the apocalypse. There are an amazing number of songs, pop songs, about the apocalypse, or the end of the world, or about surviving, or about the end of civilization,” he said. “I’ve collated a list of such songs to use in the show, and also just to have because it’s kind of an interesting project. There’s actually a line in the show where the reference R.E.M.’s “It’s the End of the World As We Know It (And I Feel Fine),” saying something like, ‘This reminds me of that song …’”

Not surprisingly, that is one of the first songs on Williams’ own personal apocalypse playlist. Others include Skeeter Davis’ “The End of the World,” Tom Lehrer’s “We’ll All Go Together When We Go,” Echo & The Bunnymen’s “The Killing Moon,” Cat Stevens’ “Wild World,” Prince’s “1999” and Fishbone’s “Party at Ground Zero.”

“My favorite right now is Johnny Cash’s “The Man Comes Around,” said Williams. “It’s great. He recorded it just before he passed away. It’s about Armageddon, and a man coming down and choosing who’s going to go where, and what you are going to pay for, and who lives and who dies. It’s kind of a terrifying song, really.”

With that, he took another sip of his mango margarita, blended and overflowing with garnishes, and laughed.

“Johnny Cash singing about Armageddon,” he said. “It’s a perfect song to keep handy in case I want something to listen to if everything really does start falling apart. Till then, it’s a really good song for a dark comedy about the end of the world.”

[This story originally appeared in the Petaluma Argus-Courier. Click here to see the story as it appears online there].

PLANNING TO GO?
WHAT: “Barbecue Apocalypse,” by Matt Lyle
WHEN: March 29 – April 20, Fridays and Saturdays at 8 p.m., Sundays at 2 p.m., and Thursdays (April 11 and 18) at 7 p.m.
WHERE: Spreckels Performing Arts Center, 5409 Snyder Ln., Rohnert Park
ADMISSION: General $26; Seniors (62+) $24; Students $22; children (12 and under) $16. Call the box office at 588-3400 or purchase in-person Wednesday through Saturdays, 12-5 p.m., and one hour before every show. OR visit SpreckelsOnline.com.
WARNINGS: ‘Barbecue Apocalypse,” though very funny, contains strong sexual language and a graphic act of violence or two. Were it a film, it would most likely receive an R rating.