That the name ‘Jeeves’ immediately conjures up the image of a staid British manservant is a tribute to the staying power of author P. G. Wodehouse’s character. Since his first appearance in 1915, he’s been featured in films, television, and even an internet search engine. There was but a single theatrical venture until playwright Margaret Raether began writing a series of plays beginning with Jeeves Intervenes, running now at Sonoma Arts Live. 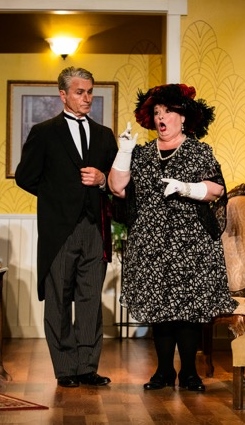 Jeeves (Randy St. Jean) is the unflappable valet to Bertie Wooster (Delaney Brummé), an upper-class twit who Jeeves is constantly rescuing from troubles of his own making. Under pressure from his imperious Aunt Agatha (Jennie Brick), Bertie finds himself engaged to Gertrude Winklesworth-Bode with whom Bertie’s ne’er-do-well friend Eustace Bassington-Bassington has fallen hopelessly in love. Other complications arise, but leave it to Jeeves to sort it all out.

It’s a snazzy production with nice costume and set design work. Director James Jandak Wood has cast it well with St. Jean perfect as the imperturbable Jeeves. There’s good work from the supporting players, especially Nick Moore as Eustace and Libby Oberlin as Gertrude, but Wood erred in having Brummé play Bertie with a voice that can best be described as “annoying”.

How annoying? Well, he had me envisioning a sequel entitled Jeeves Drowns Bertie in the Thames.

Wodehouse published a collection of essays under the title Louder and Funnier, which is the stage direction Jared Sakren must have given the cast of the 6th Street Playhouse production of The Compleat Wrks of Wllm Shkspr (Abridged). 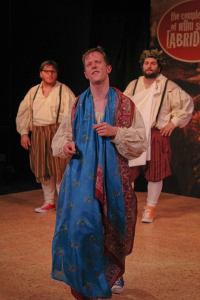 Significant energy is expended by the hard-working and talented Nick Mandracchia, Zac Schuman and Erik Weiss in comically presenting 38 Shakespeare plays in two hours, but it needn’t be delivered almost entirely at a decibel level that rivals the nearby SMART train.

The show is a fast paced series of jokes, bad puns, quick changes, and audience interactions. Some things worked, others (like the attempts at topical humor) didn’t. What comedy there was to be found was often drowned out by the vociferous cast.

C’mon, guys. If I wanted to spend two hours being yelled at, I can just go visit my mother.