One of the oddest plays I’ve seen in a while, Will Eno’s The Realistic Joneses isn’t particularly real in its examination of two suburban couples who share the same surname. It does, however, often ring true.

Set in an unnamed town, Bob and Jennifer Jones (Chris Schloemp and Melissa Claire) are spending a quiet evening in their backyard talking about nothing (and talking about talking about nothing) when some new neighbors come over to introduce themselves. John and Pony Jones (Chris Ginesi and Paige Picard) have rented a house down the street and bring a bottle of wine over to break the ice. The awkward conversation that comes with meeting new people is really awkward as it veers into the personal.

It seems that Bob and Jennifer are there because it’s the best place for Bob to receive treatment for a degenerative neurological disease characterized by pain, bouts of blindness, and loss of memory. Bob deals with it by not dealing with it.  Jennifer deals with it daily and is beginning to crack under the strain. John and Pony have just picked up and moved there on a whim, but it soon becomes clear the two couples have something in common.

The subject matter doesn’t seem ripe for humor, but it is. Its marvelously quirky dialogue is often absurd, and yet it feels genuine. In one of the plays best scenes, the two male Joneses have a late-night conversation: 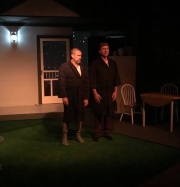 Bob: “Did you just have ice cream?”

Delivery of dialogue like this can be a challenge and in the hands of lesser talents can come off cheaply, but director Argo Thompson has a cast that can handle it. Schloemp is excellent as the “everyman” struggling to deal with a failing body. Claire’s role as the put-upon wife borders on the stock, but she gives it just enough variance – particularly in her moments with John – to keep it interesting. Ginesi and Picard garner most of the laughs as neither’s character seems to possess much of an internal filter with Picard’s Pony having the verbal metabolism of a hummingbird.

The Realistic Joneses is difficult to categorize. It’s tough to find meaning in a play about the meaningless of meaning and for a play as funny as it is, an overwhelming sense of melancholy hangs over it. Highly original, it makes for a wonderfully weird evening of theater.

An edited version was originally published in the North Bay Bohemian