Why? It’s a question we ask ourselves daily as we wake up to news of the latest national tragedy or act of incomprehensible behavior. That too-oft-asked question with the most elusive of answers is at the heart of Peter Shaffer’s Equus.

Psychiatrist Martin Dysart (Craig Miller) is asked to take on the case of Alan Strang (Ryan Severt), a 17-year-old boy who has committed a horrific act of animal cruelty. Alan, a quiet boy, has taken a chance equestrian encounter in his youth and developed it into a personal theology. His devotion, passion for and submission to his God “Equus” (Latin for “horse”) makes his brutal and inhumane act of blinding horses in his care with a metal spike all the more difficult to fathom. Dysart must find out why. 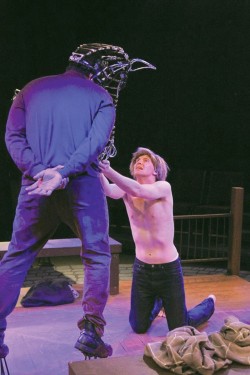 Was it the conflict inherent in being brought up by a devout mother (Juliet Noonan) and atheist father (John Shillington)? Was it confusion over his burgeoning sexuality that’s been awakened by his co-worker Jill (Chandler Parrott-Thomas)? Or is it—in the play’s most disturbing point as expressed by Alan’s mother in her own search for answers—that evil simply exists?

Dysart’s search for the answer leads him to question his own state in life. His career is in a state of “professional menopause,” and he’s married to a woman he hasn’t kissed in years. He envies Alan’s passion and begins to ponder whether it’s right to “cure” him and damn him to a life of normalcy. Dysart’s psychological quest finally leads to Alan’s confession and a recreation of the event, but is the initial question answered?

Director Lennie Dean balances the play’s innate theatricality with genuine human emotion, which is all the more commendable considering four of the cast spend a good deal of time portraying horses. It’s a visually striking production, aided in good measure by original 1970s costume pieces courtesy of the American Conservatory Theater and an effective lighting design by April George.

Miller is excellent as the psychiatrist grappling with his own demons. Severt bares Alan’s soul (and body, as does Parrott-Thomas in the crucial climax) and gives a gut-wrenching performance. Superb work is done by the entire cast as they move in and out of the story as multiple characters.

An almost perfect combination of script, design, direction and performance, 6th Street Playhouse’s Equus is not an easy play to sit through. It is also not to be missed.

As originally published in the North Bay Bohemian