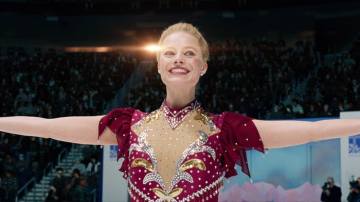 To Margot Robbie, Tonya Harding was a pit bull.

That’s not just a metaphor. It’s how the fast-rising Australian actor (Suicide Squad, Goodbye, Christopher Robin) elected to play the real-life figure skater in the just-released movie I, Tonya.

The film, which is already appearing on many end-of-year top 10 lists, screened on December 2 at the Christopher B. Smith Rafael Film Center, in a special event featuring Robbie onstage with co-star Allison Janney, the film’s director Craig Gillespie (Lars and the Real Girl) and the screenwriter, Steven Rogers (Hope Floats, Stepmom). In answer to a question posed during the post-screening conversation between the guests and moderator Zoe Elton, Robbie revealed that she often uses an acting technique in which she identifies her characters as a particular animal.

I, Tonya is an aggressively unconventional biopic. Interspersed with recreations of taped interviews with various characters who populate the story, the film offers clashing viewpoints, explanations, excuses and context.

Harding is the notorious athlete who fell from grace—and the pinnacle of world champion skating competitors—after being implicated, fairly or not, in the brutal kneecapping of rival skater Nancy Kerrigan, in 1993. Harding’s ex-husband Jeff Gillooly (Sebastian Stan), eventually did jail time for the attack, along with his bizarre conspiracy-theorist buddy Shawn (Paul Walter Hauser). Harding was banned for life from professional skating, but has always claimed that she never knew about plans for the assault on Kerrigan, a view the film’s script mostly seems to agree with.

“That script was like nothing I’d ever read before,” Robbie said, when asked about her decision to take on the role of such a universally despised character. “It seemed to break every rule a screenplay is supposed to follow, and I loved that—and I didn’t even know, at first, that it was a true story! I’d never heard of Tonya Harding. And the story was so outrageous I just assumed it had to be fictional.”

In the film, Janney plays Harding’s mother LaVona, who easily ranks as one of the worst mothers in the history of motion pictures.

“I couldn’t play her like that, of course,” Janney said. “To LaVona, she was just doing what she had to do to keep her daughter tough. It was quite a process, though, playing someone who’s that willfully mean all the time. It was fun, because an actor always loves to dig into meaty roles, but it was hard.” 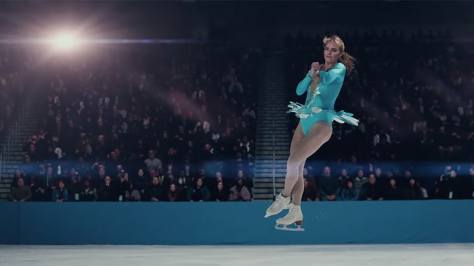 Back to Robbie and the pit bull, an animal, it seems, was the key to a remarkable performance.

“Doing the pit bull thing weirdly helped me find a sense of Tonya, to connect with where she was emotionally,” Robbie explained. “When you are distilling a character down to her clearest motivations, adding a sense of who that person would be as an animal really does help you narrow things down. It’s a weird kind of acting technique, I know, but sometimes it really works, and it definitely worked with Tonya.”

Click HERE to read full article in the Pacific Sun