As Cinnabar Theater prepares to launch its new show on Oct. 14, all involved are aware that “The Quality of Life,” from award-winning playwright and screenwriter Jane Anderson, is not an easy play to describe in a single word or sentence.

The play tells the story of a conservative Christian couple from the Midwest who are coping with a recent devastating loss and a pot-smoking, yurt-dwelling couple dealing with cancer and the aftermath of a fire that left them homeless. It’s a gently and lyrically written exploration of how these people come together to challenge each other’s assumptions about what it means to live a rich, full life. Beyond that, is “The Quality of Life,” directed for Cinnabar Theater by Taylor Karabow, a sad play or a happy play? Is it funny or upsetting? Challenging or life-affirming?

“Yes. My answer is, ‘Yes.’ This play is all of those things,” said Richard Pallazziol, who plays Bill, one of the mid-westerners.

As an evening rehearsal began, the cast and their director gathered in the Cinnabar Theater office to discuss how working together on “The Quality of Life” has shifted their own perceptions of life, death, grief – and how all of that can sometimes be funny. 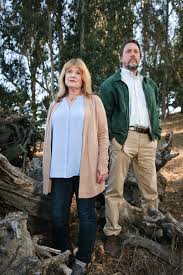 “It’s got everything, this play does,” Pallaziol said. “The first time I read the script, I cried at the end. And I don’t like to cry.”

“Not that the ending is where the sadness is,” pointed out Elly Lichenstein, who plays Jeanette, one of the Californians. “In a way, all of those components – sadness, humor, happiness, heartbreak – they are all present in every single minute of this play.”

Director Karabow said when she first read the script, she “only found it funny in the way that life is funny.”

“When there are laughs in this story, they’re the kind of laughs where you recognize yourself in it, or you recognize some truth about life, something so wonderfully human and real you just have to laugh at it,” she said.

She said the performance is timely, opening during a time where many of the same issues addressed in the script are at the forefront of everyday conversation.

“Right-to-die issues, medical marijuana, divisive politics on both sides – even a big fire that leaves people without a home – all of that is in the play,” she said. “And we’re going to be voting on some of those things in November. So the timing is really incredible.” 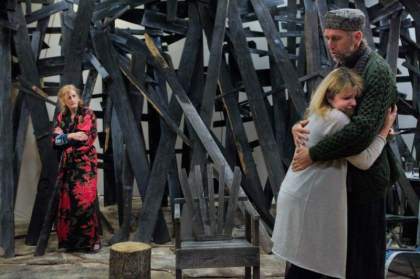 James Pelican, playing Lichenstein’s husband Neil, said the play also touches on issues of mortality, though it’s not a tragedy.

“I think what this play is getting at is that death and loss are not tragic at all,” he said. “Everybody loses people, and everybody eventually dies. The four characters in the play all start out with certain perspectives on grief and death, and by the end they are able to change those beliefs a bit, and come to grips with all of it.”

According to Pallazziol, each character has a unique perspective about life after death.

“But then they have to answer the question of whether there is life after death for the survivors, for those who go on living after a loved one has died,” Pallazziol said.

Susan Gundanas, playing Dinah, the wife of Pallazziol’s character, said she was drawn to the play because recognized elements that existed in all the characters.

“I’ve known these people, or people like them, all of my life,” she said. “I’m some of these people myself. This play is truly universal. It’s very real, how it shows the different ways people choose to deal with loss. It’s a very beautiful play.”