In the pantheon of great American plays, Tennessee Williams’ The Glass Menagerie is surely in the upper tier. Perhaps the most personal of Williams’ works, its name recognition, small cast, simple setting, and straight-forward storytelling have made it a staple of community theatres. Its ease of staging, however, belies its complexity and the quality of productions I’ve attended over the decades has ranged from heart-breaking (in a good way) to heart-breaking (in a bad way.)  The Ross Valley Players have an excellent production running through April 5.

An apartment in pre-World War II St. Louis is the setting for the tale of the Wingfield family. Tom Wingfield (Greg Crane) addresses the audience as the show opens and informs them that what they will be seeing is a memory play and, as memory is rarely precise, what the audience witnesses may not be what actually occurred.

Tom is a frustrated writer putting his time in at a warehouse and dreaming of an escape from his suffocating life. He lives at home with his fading southern belle mother Amanda (Tamar Cohn) and his shy, withdrawn, and crippled sister Laura (Carolyn Arnold). Amanda, when she’s not berating her son for his late nights at the “movies”, is desperate to build a life for Laura, be it through an education or through marriage. 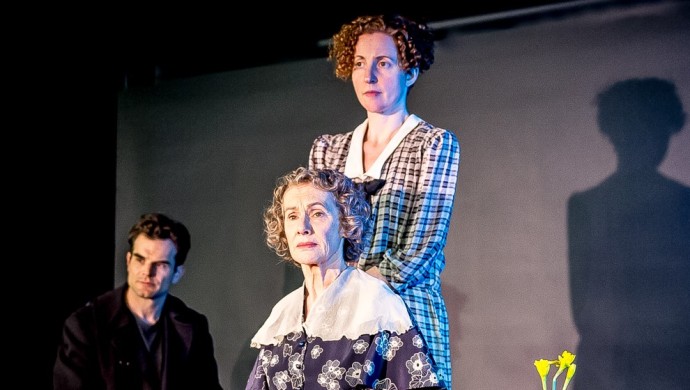 Tom finally acquiesces to his mother’s request to invite a co-worker to dinner to meet Laura but the arrival of the “gentleman caller” (Jesse Lumb) yields devastating results.

Director David Abrams and his cast have made some very deliberate, somewhat different, but nevertheless interesting choices for this production. They bring out a lot of the humor found in a piece that is generally classified as a tragedy. Crane’s Tom shows only a modicum of the regret that is common to the portrayal of the character. Arnold’s Laura shows little of the physical disability repeatedly referenced forcing the conclusion that Amanda’s fixation on it was more damaging than the condition itself.  Cohn commands the stage as Amanda and prowls the stage like a lioness protecting her cubs, oblivious to the damage she inflicts.

Bruce Vieira’s sound design contributes a lot to the atmosphere and often fills a void left by Ken Rowland’s set design. The title collection, for example, is curiously invisible to much of the house.

I wanted to see it, as you should this show.