There are three kinds of people.

For the record, I’m one of the first ones.

I can even quote whole passages. So I’m going to end this column with my favorite line from the play.

How much do I love it?

If aliens landed and asked me to suggest one play that best defines and encapsulates American human beings of the 20th Century, I’d hand them a copy of “Our Town.” Or better yet, I’d take them to see a production of it. One generally doesn’t have to wait long for some theater company or other to stage the play. No matter how many people say they hate it, there’s always someone ready to take a crack at staging the thing.

“Our Town,” of course, focuses on the lives of the people of Grover’s Corners, New Hampshire, and takes place at various moments between 1901 to 1913. Narrated by a mysterious, godlike character called “The Stage Manager,” it’s separated into three sections, titled “Daily Life,” “Love and Marriage” and “Death and Eternity.” The primary are Emily Webb and George Gibbs, next-door neighbors who start out as kids and then, in fits and starts, grow up, get married, and as the final third’s title indicates, move from the tiny daily details of life to a face-off with some of the biggest questions human beings ask. The first time I saw “Our Town,” it took my breath away.

It continues to take my breath away, whether in a professional or nonprofessional production, whether fully living up to its potential or only hinting at it. And I’ve seen the full spectrum.

I was recently asked how many times I have seen the 1938 Pulitzer winner. It was last Saturday, actually, while handing over my ticket to see Novato Theatre Company’s current staging of Wilder’s indelible, unstoppable play. For the record, Novato Theater Company – a plucky little community theater nonprofit with a home base in a small strip mall just off the freeway — is now celebrating its 100th anniversary. This means that NTC had been operating for 18 years when the Wilder produced “Our Town,” taking a crack at solving what he saw as a major predictability and laziness problem on the American stage. He had already earned one Pulitzer Prize, for his 1927 novel “The Bridge of San Luis Rey,” and would go on to claim a third, for his 1942 play “The Skin of Our Teeth.”

“Our Town” is the one he’ll be remembered for.

But … back to last Saturday night.

It was Norman Hall, the veteran North Bay actor, who asked me that question, about my own history with “Our Town,” as he took my ticket at the door. That’s one charmingly consistent thing about North Bay theater: one week you can see an actor playing the lead in a play somewhere, and the next weekend you’ll run into them volunteering as an usher or parking lot attendant somewhere else.

It’s not called Community Theater for nothing.

Anyway. It took me a moment to do the math in my head. After a few seconds, I informed Norman that, including the production I was about to see, I can claim to have caught seven live productions of “Our Town,” in addition to seeing the 1940 film adaptations and a three different made-for-television versions, including my favorite, the 2003 PBS/Showtime production starring Paul Newman. 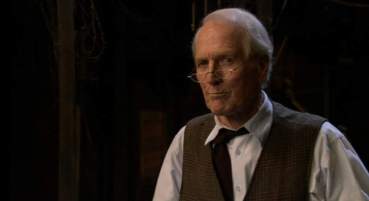 That production, based on the 2002 Broadway run directed by James Naughton, retained Wilder’s instructions that the play be performed on a bare stage with no scenery, minimal furnishings beyond a couple of tables, some ladders, several wooden chairs, and no props. As Wilder himself made crystal clear, though the story the actors tell takes place in Grover’s Corners at the turn of the century, “Our Town,” the play, is set in a modern day theater. Wilder warned people not to stray from that. The play has got to remain a drama about people in a theater performing a drama about people in a small town. Today, it would be called “meta,” a concept Wilder more-or-less helped introduce to the American stage.

That’s one of the things I love about it, honestly.