You won’t find any of these in A Gentleman’s Guide to Love & Murder, running through Oct. 27 at Rohnert Park’s Spreckels Performing Arts Center. What you will find is a very entertaining, macabre musical that is a perfect theatrical compliment to the Halloween season.

Upon his mother’s passing, Monty Navarro (Andrew Smith) is told he is actually a member of the distinguished D’Ysquith family. The family disowned his mother after she ran off with a (shudder) musician and Monty is actually ninth in line for the Earldom of Highhurst.

After being thrown over by his shallow, materialistic girlfriend Sibella (Madison Genovese) for a wealthier man, Monty seeks to improve his lot in life and win her back. He contacts the D’Ysquith family in the hopes of gaining a position with their firm but is rejected. While seeking the support of a member of the family who’s a clergyman, circumstances arise that make it clear to Monty that the only way he’ll ascend to his rightful position in the family is to knock off those who precede him. 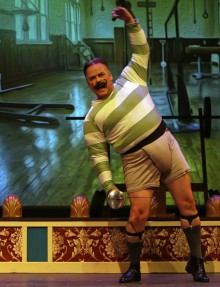 The plot may sound familiar, as the novel upon which it’s based was also the source material for the 1949 film Kind Hearts and Coronets starring Alec Guinness in his pre-Obi Wan days. Turned into a Broadway musical by Robert L. Freedman and Steven Lutvak, it won four Tonys in 2014 including Best Musical.