There aren’t a lot of plays that explore Native American history or the modern-day social and political issues that continue to challenge that community. Mary Kathryn Nagle’s Sovereignty, running at the Marin Theatre Company through Oct. 20, attempts to do both in about two hours.

Sarah Ridge Polson (Elizabeth Frances) returns to the Cherokee Nation in Oklahoma seeking a position with Attorney General John Ross (John Waid) with the hope of enforcing the Violence Against Women Act on tribal lands and perhaps getting the opportunity to overturn the U.S. Supreme Court’s 1978 Oliphant decision. That decision declared that Native American Tribal Courts had no criminal jurisdiction over non-Native Americans.

Things are complicated by family history. Sarah’s ancestors were part of the Cherokee nation who agreed to the Treaty of New Echota which ceded all Cherokee territory east of the Mississippi to the United States and led to the Trail of Tears.  Ross’s ancestors considered those that supported the treaty traitors and put many of them to death.

So begins the back and forth between the two centuries that tells the story of the Cherokee nation, the abuse they suffered (and continue to suffer) at the hands of the United States government, the two families, and how the decisions of the past continue to haunt the present. 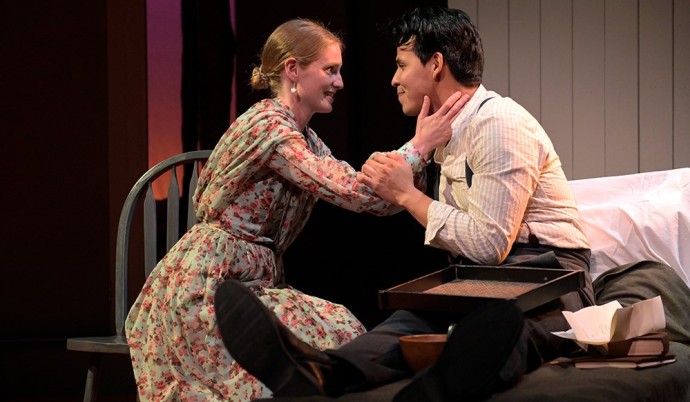 Playwright Nagle is also an attorney which would explain the very legal approach she took to her script. In her zeal to enter all the facts of her case, she enters all the facts of her case through reems of expository dialogue in which her characters come off more as court clerks citing cases than co-workers and family members engaged in conversation.

It’s not the fault of director Jasson Minadakis’s talented cast (the majority of whom are Native American) that the dialogue they’re given to deliver often seems straight out of a History Channel reenactment or that one character leaps from charming goofball to vicious thug in a seeming-millisecond.

I left the opening night performance thinking that rather than cram two centuries worth of history into a single play, audiences might be better served with a series of plays (à la August Wilson) that tone down the legal-ese and up the humanity quotient.

There’s a lot of good work on stage and the information imparted by Sovereignty is important (and sadly little-known), but theatre needs to be more than just a staged legal brief.

This review originally ran in an edited version in the Pacific Sun.