When something becomes popular enough to be successfully parodied, what made the original source material so popular tends to be forgotten. Case in point – the British murder mystery as exemplified by the works of Agatha Christie.

Christie wrote 66 detective novels (many featuring the characters of Miss Marple or Hercule Poirot), 14 short story collections, and about a dozen plays. In 1952, Christie’s The Mousetrap opened on London’s West End, where it has run continuously for a record-holding 67 years. Marin’s Ross Valley Players open their 90th season with a production that runs through October 13.

Giles and Mollie Ralston (the stiff upper-lipped Evan Held & Heather Buck) are recent newlyweds and the proprietors of Monkswell Manor, a guesthouse that’s about to receive its initial guests. The first to make it through a snow storm and arrive is Christopher Wren (the giddy Andre Amarotico), a rambunctious young man to whom Giles takes an immediate dislike. He’s followed by:  Mrs. Boyle, a staid woman who makes Downton Abbey’s Dowager Countess look like a laugh-riot (a marvelously chilly Tori Truss); retired military-man Major Metcalf (Steve Price); and the mannish Miss Casewell (Maria Mikheyenko).  An unexpected guest arrives in the form of Mr. Paravicini (a ridiculously-accented Robert Molossi), a European whose car has, of course, become inoperative. 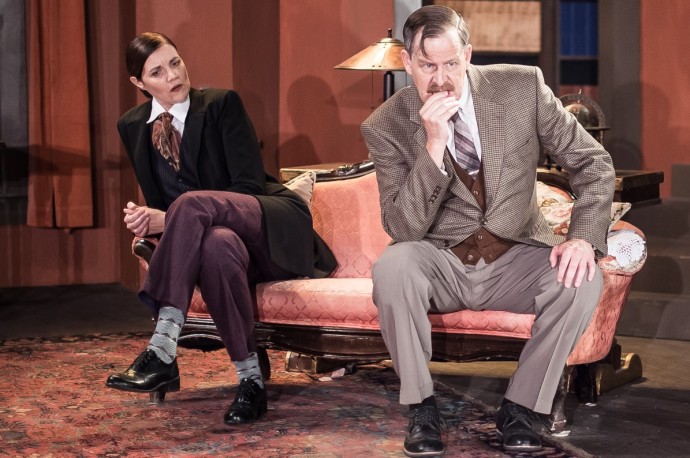 A phone call informs the guesthouse occupants that a police detective will soon arrive, which seems to upset just about everyone until they realize that no one could possibly get through the blizzard outside. Faster than you can say “Johnny Mosely”, Detective Sergeant Trotter (Steven Samp) arrives on skis to notify them that a murderer is on the loose and may be heading for Monkswell Manor, that is unless the murderer is already there!

Who is the murderer’s target? What’s the connection between the snowbound residents and a heinous crime from years past? Is everyone really who they say they are? Why is the phone – and eventually another person – dead?

Yes, clichés abound but you have to remember Christie’s the one who invented these clichés.

Director Adrian Elfenbaum has his cast play it straight and it works almost to the end but for a curiously-blocked climax that really needs to be worked on.

I’ll honor the tradition of secrecy and the spirit of fun with which this play is produced and reveal nothing more.

Well, how about this – the butler didn’t do it.

This review was originally published in an edited version in the Pacific Sun.