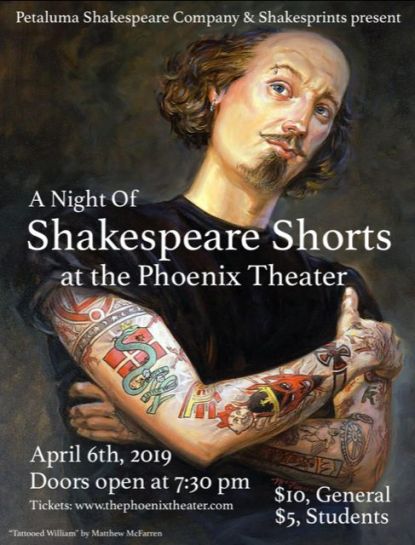 Everyone’s heard that famous Shakespeare speech (or some of it, anyway) about how all the world is a stage, and how men and woman are just actors walking on and off. How each one of us gets to play a lot of different parts in their life, beginning with the role of a baby (“Mewling and puking,” thanks Shakespeare!) and a whining student, then a young lover, “Sighing like a furnace.” Then on into playing an elderly individual (“Last scene of all, that ends this strange history”), with some fairly alarming-but-accurate descriptions of what playing that part entails (“sans teeth, sans eyes. Sans everything …”).

And the point that old Shakespeare is making in it — that our lives are endless opportunities to perform short little scenes, all linked together into one big show called human existence — is especially interesting in the context of this weekend’s “A Night of Shakespeare Shorts” at the Phoenix Theater, Saturday, April 6, at 8 p.m.

Partly a Shakespeare showcase and birthday party (the playwright turns 455 on April 26) and partly a big fundraiser (for Petaluma Shakespeare Company), the event is also a community variety show blended with a TV-style, Shakespeare-themed performance competition (maybe they should have called it “So You Think You Can Act?”). The word-powered extravaganza features dozens of Sonoma County actors performing short scenes from Shakespeare plays, resulting in one team taking home a $500 prize for Best Scene of the Evening. There will also be secondary prizes of $100 for Best Dramatic Scene and Best Comedic Scene.

“A Night of Shakespeare Shorts” is a group effort, co-created by Crispin Clarke (of Petaluma’s Shakesprints card company), the Phoenix Theater, and artists from Petaluma Shakespeare Company, which annually stages free Shakespeare on the Foundry Wharf lawn. Organizers began soliciting applications from local actors in the fall of last year. Each scene must be lifted from a Shakespeare play, and be no longer than 10-minutes. Creativity and entertainment value will be considered in judging each scene, which will be performed with live musical interludes performed by local musicians. The secondary prizes will be awarded based on audience reaction, but the big $500 prize will be decided on by a panel of esteemed Bay Area Shakespeare aficionados and experts.

Petaluma’s own Professor John Langdon, recently returned from London – where he’s been teaching Shakespeare in the Bard’s own original stomping grounds – will be hosting the event, dropping informational tidbits about Shakespeare along the way. In addition, the show will include a live comedic performance by Petaluma actor Jeffrey Weissman, who’s appeared on many local stages and in the films “Back to the Future II & II,” “Pale Rider” and “Twilight Zone: The Movie.”

The idea for the Shakespeare Shorts show was reportedly the result of a conversation between the producing parties, musing about how to create more local performance opportunities for gifted young actors.

[To read the full story in the Petaluma-Argus Courier, click here]