There’s an interesting style of theatre in which a piece of dramatic prose, usually a short story or selected chapters from a longer piece, is fully staged and performed. Usually referred to as a “word-for-word” or “page-to-stage” dramatization, it takes some getting used to as literally every word on the page – every “she said’ and “then I”, every bit of exposition, every interior monologue – is spoken.

Not quite reader’s theatre and far more expansive than simple storytelling, it’s a very unique way of presenting a story to an audience. There’s even a company in San Francisco – named, appropriately enough, “Word for Word” – that’s been doing productions of this type for twenty-five years.

It’s the approach director John Shillington and the Santa Rosa Junior College Theatre Arts Department take to tell the story of How the Garcia Girls Lost Their Accents. Two chapters are taken from the 1991 novel by Julia Alvarez and given the page-to-stage treatment.

Alvarez’s novel is more of a collection of stories told from the different perspectives of the four Garcia sisters about the challenges they faced as emigrants from the Dominican Republic. The chapters cover thirty years in the family’s life, from their childhood on the Caribbean island to their adult lives as emigrants to the United States. Two chapters are performed in this presentation – “Floor Show” and “The Rudy Elmenhurst Story”. 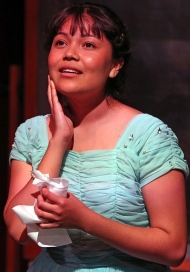 “Floor Show” tells the tale of the Garcia family’s big night out courtesy the largess of a well-to-do American friend. It’s told by Sandi (played by Jasmine Flores-Nunez), the youngest of the four Garcia sisters and features the Garcia parents. Papi (Khalid Shayota) is having difficulty getting his license to practice medicine approved while Mami (Jisaela Tenney) is trying to raise her four girls properly in a foreign land. They are preparing to go out for a fancy meal at the invitation of Dr. and Mrs. Fanning (Shane Roberts, Haley Hollis), a couple they met back in the Dominican Republic. Mami is very clear as to what she expects from her girls (she will order their modest meals, they will like everything they eat, etc.) and Papi is somewhat ashamed at what he sees as charity.  Several things happen over the course of what should be a pleasant evening that reinforce the family’s feelings of displacement.

“The Rudy Elmhurst Story” is told by Yolanda (played by Aaronne Louis-Charles, Annelise Hermsen, and Katerina Flores as the character at various ages), the third-oldest of the sisters. It’s the late 1960’s, the sexual revolution is well underway and she’s away at school. On her first day of English class, she draws the attention of one Rudy Brodermann Elmenhurst III (Riley Craig). They are soon an “item” but the conflict between Rudy’s liberal take on sex (“Can’t it just be fun”?) and the mix of Yolanda’s Old-World upbringing with the fragmentation of identity that comes with assimilation leads him to leave her and her to believe that she “would never find someone who would understand my particular mix of Catholicism and agnosticism, Hispanic and American styles.” There’s a bittersweet, but empowering ending to the story.

Shillington and his diverse cast are good storytellers. They’re housed in Newman Auditorium where the use of technical elements is limited, but designer Andrew Moore manages enough lighting to give the show a more theatrical feel to it than the lecture hall environment usually allows.

The (mostly) young multi-cultural cast are the perfect vehicles to tell stories that must resonate with many of them. High school student Jasmine Flores-Nunez perfectly captures the petulant behavior of the even younger Sandi, and the actresses playing Yolanda give a real sense as to the character’s internal conflicts and maturation. There’s good work by the young ensemble throughout the piece.

While the stories focus on the girls, the challenges faced by their parents are not ignored. The difficulties in having to start over after leaving a good life are well played by Shayota and Tenney.

Again, the presentational style of a “page-to-stage” production will be, shall I say, somewhat foreign to most audiences. It’s akin to watching a film in a different language and having to read subtitles. Eventually, something clicks in the brain, you adapt and things just flow from that point on. The combination of that unique presentational style with a diverse, vibrant cast makes the SRJC production of How the Garcia Girls Lost Their Accents well-worth checking out during its limited run.