Marisela Treviño Orta’s The River Bride returns to Marin County as the season opener for the College of Marin’s Drama Program. Last seen in a bare-bones production in a vacant San Rafael storefront courtesy of Alter Theater, Orta’s play is an interesting combination of a Brazilian folk tale with an M. Night Shyamalan film script by way of a Twilight Zone episode.

The play is set in a small fishing village along the Amazon River. Belmira (Vanessa Lopez), a young village girl, is whiling away the days until her wedding to Duarte (Ricardo May-Tep). She longs to see the ocean and the big city and sees marriage as way to escape from the village.

While fishing for a catch to serve at the wedding banquet, Duarte and Belmira’s father Sr. Costa (Deivi Velasquez) find an unconscious man – fully clothed in a Panama suit and with a bandaged head – entangled in their net. They bring him back to their village where, after being revived, he identifies himself as Moises (Justin Marx.) Moises soon sets his eye on Belmira’s older sister Helena (Raysheina de Leon-Ruhs.) Helena, at first hesitant and wary of the mysterious Moises, soon finds herself reciprocating his feelings. Moises wishes to get married immediately, as a matter of fact, he must be married in three days. Helena, however, has always deferred to her younger sister and does not wish to intrude on her day. Belmira, who has always taken what she wishes, soon sees a better opportunity in a life with Moises.  She should be careful what she wishes for, as she will indeed soon see the ocean. 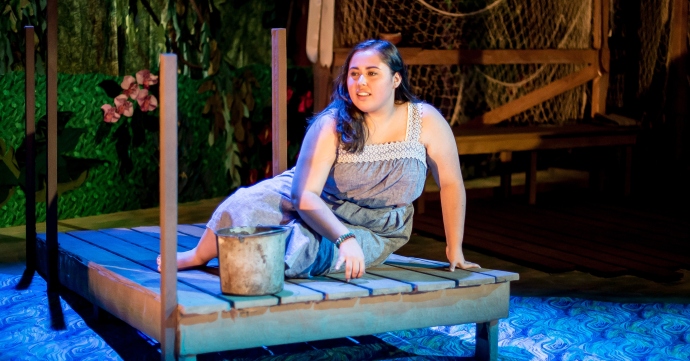 It’s a terrific looking and sounding production, with the small studio theatre transformed into a riverside village with an eye-popping set design by Ron Krempetz.  The theatre resonates with the sounds of the river, the nearby jungle, and the music of the village courtesy the design work of Billie Cox.

The combination of director Molly Noble’s deliberate pacing and some of the cast’s monotone delivery made an 80-minute show feel much longer. Sometimes silence is golden but there were moments in this production where it came off as leaden. Lopez and Juji Johnson (as the girls’ mother) brought the energy and stood out among the small cast.

The River Bride is a fable about love that, while well served by the technical elements provided by a traditional theatre setting, too often lacks passion.

This originally appeared in the Pacific Sun.