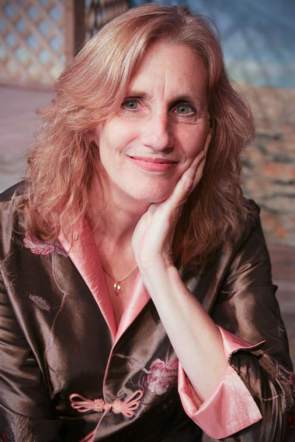 ‘The Fantasticks,” by Harvey Schmidt and Tom Jones, originally debuted in 1960, and ran off-Broadway for 42 straight years. That makes it one of the most successful and popular musicals in history.

But its longevity is not the most remarkable thing about the “The Fantasticks,” beginning a three-weekend run this Friday at Petaluma’s Cinnabar Theater. Based on an 1894 French play by Edmond Rostand (best known for writing “Cyrano de Bergerac”), “The Fantasticks” has somehow maintained its standing as one of the all-time great American romances — lavishly steeped in wistful sweetness and open-hearted comedic charm — while actually being one of the darkest, strangest, and most unnervingly truthful looks at love and romance ever turned into a popular musical.

It’s that contradictory blend of lightness and darkness, of sadness and hope, that makes “The Fantasticks” so hard to shake off, and why so many theater companies keep returning to it over and over. And it doesn’t hurt that the musical score features such indelible songs as “Time to Remember,” “Soon it’s Gonna Rain,” “Never Say No,” “Plant a Radish,” and “They Were You.”

“The whole thing about this beautiful little piece,” says Elly Lichenstein, director of the Cinnabar production, “is that it takes you on a journey from the romantic, rose-colored-glasses dreamscape of youth, to the reality and realism of maturity. It takes us from young love to mature love. The play starts out very stylized and fanciful, and by the end, it becomes very naturalistic and grounded. The play itself goes through the same experiences that its characters do.”

The story follows two next-door neighbors, Mr. Hucklebee and Mr. Bellomy, who’ve been feuding for years, and have built a wall to keep their kids, Matt and Louisa, from meeting and falling in love – which of course they do anyway. Various twists and turns are narrated by the mysterious El Gallo, who occasionally steps into the story himself, even as he directs and orchestrates everything the characters do, and even adding suggestions as to how they play their parts. Performed with minimal props and set pieces – the wall, for example, is represented by a two-sided ladder – the show was strategically designed to work well in small theatrical spaces. 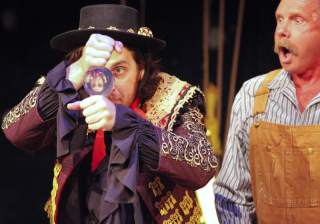 “As the audience, you enter into a world that is intentionally theatrical, and intentionally narrative, in that you are watching players presented as players, telling a story,” explains Lichenstein. “It borrows from ancient conventions and older art forms like Noh and Kyogen, from Japan, and from vaudeville and come types of clowning.”

Lichenstein says she chose “The Fantasticks” for the 2017/2018 season because she had a certain cast in mind for it. Sadly, the actor she’d chosen to play Huckleby, Cinnabar veteran Stephen Walsh, passed away in January.

“It broke all of our hearts, so we’re doing the show in his memory,” says Lichenstein, who ended up casting one of Walsh’s favorite co-stars, Krista Wigle, in the part he’d have played. In so doing, she’s changed the character of Matt’s father to Matt’s mother. 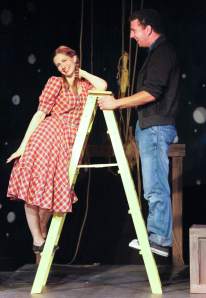 “Once we cast Krista, we decided to embrace the woman-ness in her,” says Lichenstein. “It works really well, actually. And we feel Stephen’s presence with us every time we rehearse. We are having a hard time getting through a rehearsal without breaking up laughing. There is so much laughter and love in this cast. Everyone is bringing all kinds of magnificence to the plate.”

What: ‘The Fantasticks,’ the classic musical by Harvey Schmidt and Tom Jones.

Tickets: Purchase tickets on line, at the box office 30 minutes before the show (while supplies last), or you can call (707) 763-8920 between 10 a.m. and 3 p.m. weekdays. Tickets may also be purchased online at CinnabarTheater.org.