It’s here at last. The day Lucy London has been waiting for. Today is the day she learns how to fly.

“I’m so excited! But also a little nervous,” admits London, who will be playing Wendy in Spreckels Performing Arts Center’s upcoming production of “Peter Pan.” “I’ve heard that it can hurt a little, when you are getting used to the flying harness,” she says, wincing playfully, “so yeah, I’m nervous. But mostly, I’m just really excited!”

London, 17, of Petaluma, has been rehearsing for weeks, but till now, she and her fellow “Peter Pan” cast-mates have kept their collective feet firmly on the ground. Well, on the stage. This morning — day one of Flying Training — several of them will be stepping into their harnesses linked to sturdy cables reaching up into the wings, where the show’s elaborate “flying system” has recently been installed.

“Are you ready to fly, my lovelies?” asks director Sheri Lee Miller with a cheerful smile.

“Yes!” shouts London, joining a chorus of enthusiastic affirmations supplied by Sarah Wintermeyer (Peter Pan), James Cotè and Tony Cavallero (Michael and John Darling), and ScharyPearl Fugitt (the Neverbird). Since the villainous Captain Hook and his crew of swashbuckling pirates do not fly, actor David Yen (who will be wearing the famous phalangeal hardware as Hook) is not here this morning. Those who are present include members of the backstage crew, stage manager Mary Jo Hamilton, various pirates and warriors who’ll be serving as “fly crew” — and Karl Gillick of Professional Rigging, a Bay Area company that specializes in making actors fly. Gillick, in recent Spreckels productions, has helped Mary Poppins to float through the sky and Tarzan, king of the Apes, to swing through the jungle from vine to vine.

“Okay. Let’s do harness checks for everyone,” suggests Gillick, once the actors have been strapped into their devices, which resemble Sumo wrestling outfits crossed with Batman’s utility belt and those shoulder straps at a Disneyland thrill ride. The actors wear them over their clothes, and (eventually) under their costumes. Gillick moves about, checking everyone’s harnesses, making adjustments here and there.

“I think we’re going to tighten up the back a little,” he tells London, fine tuning the harness’s buckle-work. Finally, he’s satisfied. “So … next thing is the flying,” he announces. “Please clear the stage area if you’re not flying. And … who’s going first?” 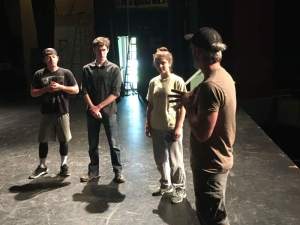 London volunteers for the honor.

As the “fly team” watches closely, Gillick brings over London’s rig wire, currently snapped into a heavy sandbag to hold it down. Before every performance, he explains, each actor’s rig will be tested by flying a sandbag across the stage, putting it through the proper mid-air choreography. Gillick carefully disconnects the wire from the bag, and clips it onto the back of London’s harness. The wire, reaching up into the wings, runs through the fly system and off out of sight, where London’s team will control her flight by pulling the other end of the wire, stepping forwards or backwards to raise or lower her, sometimes jumping down from a platform to give her even greater elevation.

“Okay, let’s pick Wendy up a little,” Gillick calls to where her operator is waiting, partway up a short ladder. Holding her line, he steps off, while out on the stage, London suddenly lifts up into the air.

Laughter, it turns out, is the natural first reaction flying. Nearly everyone who follows London bursts into peals of laughter the second they rise from the floor. Apparently, there’s just something about flying that puts a person in touch with inner reservoirs of joy and happiness. That, points out Miller, is the reason Spreckels will be auctioning off the opportunity for someone to fly, at the company’s gala preview fundraiser on Thursday, May 3. Want to fly like Lucy London? Just be the highest bidder.

(The actual flying will take place at a time to be determined).

“I think I’ve calmed down a little,” London reports with a smile, several minutes later, taking a seat out in the theater as the rest of the cast takes their turns defying gravity. Raised in Petaluma, London has always loved performing, taking classes early on at Cinnabar Theater. At age five, she was cast in her first show there, playing a turkey. Over the years, London has gradually taken on more and more demanding roles. She currently attends Marin School of the Arts, in Novato, where her academic focus is split between theater, math and environmental sciences.

“I saw the animated Disney version of “Peter Pan” the first time, when I was ten,” she says, admitting that she never knew that much about Peter, Wendy, Tinkerbell, Captain Hook, and the rest, until she took a crash course in the subject before and after auditioning for the role. “I never even read the book till I was cast,” she confesses. “Now it’s one of my favorite all time stories. I can’t believe I get to be Wendy.”

As London talks, she glances up at the stage, where Wintermeyer – Peter Pan himself, the last to fly this morning – suddenly lifts into the air, as everyone cheers and claps.

“I love this story so much,” London says. “”Peter Pan” is so much more than a children’s story. It’s so deep, and has so many layers. My favorite scene to perform is when Wendy says goodbye to Peter in Neverland. It just moves me so much, and breaks my heart every time.”

In the play’s final scene, she points out, Peter returns to find Wendy all grown up. The part of the older Wendy will be played by the actress who plays Wendy’s mom from earlier in the play.

“One of the things I find so fascinating about “Peter Pan,”” she points out, “is that when Wendy, Michael and John come back from Neverland, they are actually all a bit more grown up and mature than when they left the nursery at the beginning of the play. It’s kind of paradoxical – a play about innocence and children and always being young, that’s actually about beginning to lose your innocence and discovering that it’s time to start growing up.

“”Peter Pan” is also, I think, about forgiveness,” London adds. “Because in the end, Wendy has to learn to forgive herself for getting older. Peter doesn’t forgive her, of course. He can’t, but eventually, he does forget. Which is, probably, the best he can do. I actually love that. ”