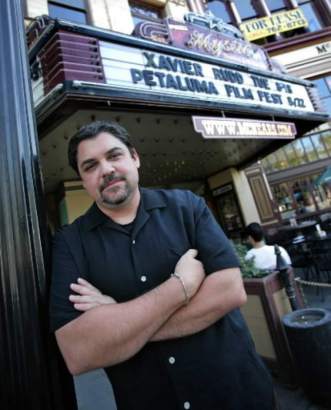 Open to the public as well as to students, taking place every Wednesday evening during school term, the series blends digital screenings of new and classic films with live film expert interviews and peppy pre-show lectures by Film Alliance founder and film teacher Mike Traina. Admission is an affordable $6 for the movie and the (optional) pre-show activities, no doubt contributing to the steadily growing popularity of the series, which began ten years ago. This year, along with the revelation of the series’ Spring lineup of films (see sidebar), Traina has also announced that he will be taking a year-long sabbatical following at the end of this season.

“I’m taking a year off to do some research, travelling to half dozen of the world’s biggest film festivals, including the Cannes Film Festival in France,” Traina says. “It’ll be good to rejuvenate myself mentally, to go out and get a fresh perspective, and see some of the great film showcases. I’m really looking forward to it.”

Traina, it so happens, is even ready to announce his own replacement, whom locals will get a chance to meet on April 4, at a screening of Nicolas Roeg’s haunting supernatural thriller “Don’t Look Now.” Film scholar Alessandro Pirolini, of UCLA, will lead the pre-show lecture that evening, and perhaps give a hint of what he’ll be presenting when he takes over the series for a year, beginning at the end of this season.

“Alessandro grew up in Turin, Italy, and earned a Ph.D. in film history in London,” says Traina. “He’s going to bring something really new and fresh to the series, I think.”

But before Traina goes anywhere, there are a remaining 14 films to be seen, and the spring schedule is full of favorites and long-buried gems. Along with previously postponed screenings of Billy Wilder’s “The Apartment” and “David Lowery’s “A Ghost Story” — rescheduled from last October due to the fires — the Spring lineup features a total of fifteen films (the first, “Cinema Paradiso,” screened last week), along with several guest appearances by filmmakers and experts, and a live pianist accompanying a double-feature screening of the uber-weird, silent circus-themed thrillers “The Unholy Three” and “The Unknown.”

“We’ll have several guests this time, including at least one I can’t announce yet, but who will be very exciting,” says Traina.

As has become a Film Alliance tradition, the first several films in the spring series will include some that Traina guessed might become Oscar candidates.

The first few weeks will include showings of “Three Billboards Outside Ebbing, Missouri,” “Ladybird,” and “The Shape of Water,” all announced last week as multiple Oscar nominees.

“The February screenings are usually pretty packed,” says Traina, “because the college community and the wider Petaluma community are interested in catching up on some of the Oscar films they haven’t seen yet.”

The middle section of the three-and-a-half-month-long series is an array of films allowing Traina to isolate and focus on specific elements of filmmaking – production design, sound editing, film editing, cinematography, etc. These will include the aforementioned “The Apartment,” the Brazilian crime drama “City of God,” the Mongolian documentary “All the Wild Horses,” the Irish biopic “Song of Granite,” and the silent films.

[Click ‘Here’ to read full story in the Petaluma Argus-Courier]