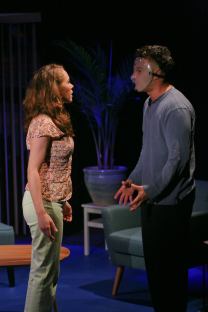 In the average 24-hour-day, we make thousands of decisions, never knowing when a seemingly innocuous choice – grabbing coffee at Starbucks (where the future love of our life is standing in line) or Peets (where a runaway car is about to kill 12 patrons) – could have life-changing repercussions.

Right now, at two different theaters, a pair of superbly crafted, deeply humane, brain-twisty shows have opened, each examining the head-spinning flexibility of fate, each one staged and performed by artists working at the top of their game: Craig Wright’s Grace at Main Stage West in Sebastopol (nicely directed by John Craven) or Nick Payne’s Constellations (Juilet Noonan, director) in The Studio at 6th Street Playhouse. 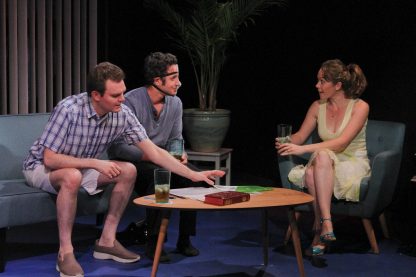 In Craig Wright’s ‘Grace’ (Main Stage West in Sebastopol), the show begins in the aftermath of a shocking act of unpremeditated gun violence. The story then rewinds (more-or-less literally) to 45 days earlier, as we witness the decision, choices, and mistakes, large and small, made by a financially tenuous born-again couple (Illana Niernberger and John Browning), their agnostic scientist next-door-neighbor (Sam Coughlin), and an irascible German pest exterminator (John Craven) who keeps showing up to spray for bugs.

Highly intelligent and cleverly designed (with kudos to sound engineer Doug Faxon and light designer Missy Weaver), Grace is a show that hang out in your mind and heart long after the final shot has stopped ringing in our ears.

The same could be said (without the guns) of Constellations. 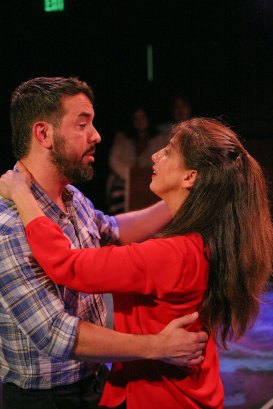 Staged in the round, as a smart, breezy 75-minute theatrical dance of words and ideas, the play follows a string physics scientist (Melissa Claire) and an organic beekeeper (Jared Wright), through a series of overlapping, slightly varied scenarios. They meet, they don’t meet, they have a terrible first date, they have a great first date, they break, they stay together, and on and one.

Every choice sets in motion a series of alternative conclusions.

Beautifully acted, movingly staged, Constellations also lingers long after, as we are forced to contemplate all the possibilities that might have been, had we only made a different choice.