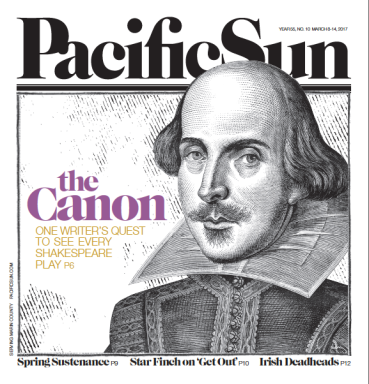 It is generally accepted that William Shakespeare—aka the Immortal Bard, aka the Upstart Crow, aka the Sweet Swan of Avon, aka the greatest playwright the world has ever known—wrote 37 plays during his lifetime, which ended exactly 400 years ago last April 23.

He possibly wrote more. Possibly a lot more. Possibly even a play called The Two Noble Kinsmen. Though there’s still an argument about that one. As I shall reveal. But all of that said, there are at least 37 Shakespeare plays, for certain. They are commonly known as Shakespeare’s  canon (the canon).

I was 21 years old when I set myself the task of seeing every single play in the canon—even the bad ones. Even Cymbeline. Even Henry VIII. Even Timon of Athens, which I’d heard was basically “unstageable.”

I would do that one, too. Basically, if Shakespeare wrote it, I wanted to see it. And no, movie adaptations of Shakespeare’s plays did not count—though to this day I still mark Franco Zeffirelli’s 1968 Romeo and Juliet, with Leonard Whiting and Olivia Hussey, as a major turning point in my life, because, well … because Olivia Hussey. 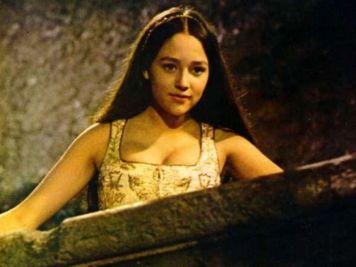 I was nine years old at the time, watching the film at a drive-in theater in Glendora, part of a double feature with something called Battle Beneath the Earth. I can’t even remember that one. But I do remember Romeo and Juliet. And though I could only barely fathom the meaning of the words, “My bounty is as boundless as the sea, my love as deep,” I knew upon hearing them that they were somehow kind of sexy and appealing and beautiful, and that Olivia Hussey-as-Juliet was totally worth, you know, dying for.

But where was I? Oh, right. The canon.

At the time, I’d only seen a handful of Shakespeare’s plays performed live. The first, for the record, was Richard III—or Dick 3, as I affectionately came to know it. That production, notable for its spirited sword fights and unconvincing ghost effects, was performed by students from the theater department at University of California, Irvine, in Southern California. Three months after being dazzled by the language of Dick 3, I caught a production of Macbeth, starring a young Danny Glover, at the Actor’s Theatre Los Angeles. That production was set in a post-apocalyptic future, with Scotland transformed into a bombed-out shopping mall. It was awesome.

In quick succession, I saw professional productions of A Midsummer Night’s Dream,The Tempest and Romeo and Juliet, and was hungry for more. By then, I had fully recognized that among my other major life’s goals—becoming a screenwriter, winning an Oscar, meeting Olivia Hussey—I would somehow, someday, experience all 37 of the Bard’s plays. It was a goal I believed I might conceivably accomplish within nine or 10 years, possibly completing the canon by the neat-and-tidy age of 30.

It took 26 whole years longer than that. But last July, up in Ashland, Oregon—home of the Oregon Shakespeare Festival (OSF)—my impossible literary-nerdy dream came true as I crossed off one final play title from the long list. The show? Timon of Athens.

It was not, as advertised, “unstageable.” It was, in fact, quite grippingly directed by Amanda Dehnert. But it was very dark—the tragic tale of a generous Athenian who loses faith in humanity after giving away all of his money, and finding that none of his former beneficiaries will bankroll his recovery. In the OSF production, there was a whole lot of the great actor Anthony Heald (Silence of the Lambs, Boston Public) wandering the stage in his underwear, rolling about in large piles of garbage, then hanging himself. It was also awesome.

Best of all, as I stepped out of the theater into the warm Oregon sunshine, I carried with me the heady, giddy delight of having just completed a remarkably ambitious task, one that most theater fans never even attempt, and very few ever actually accomplish.

My giddiness, unfortunately, did not last long.

The next day, I met Daniel Pollack-Pelzner, a literature instructor whose bona fides include his being the Ronni Lacroute Chair in Shakespeare Studies at Linfield College, and also Scholar in Residence at the Portland Shakespeare Project. He was in Ashland leading a group of school alumni, many of whom were in town for the very same reason I was.

“A lot of the folks I’ve brought with me are excited for Timon, because now they can cross it off their list,” explained Pollack-Pelzner. “One or two of them will complete the canon with this afternoon’s performance. Though I have to say, as a Shakespeare scholar, there are a number of reasons why Timon of Athens is an exciting play to see, separate from its ‘bucket-list’ quality.”

“So,” I asked, “you’re not one of those who count Timon as one of Shakespeare’s ‘bad plays?’”

“Actually, I’m fascinated by which plays we think of as Shakespeare’s ‘good plays’ at different times in history,” he replied, taking a seat on a bench on “the bricks,” the outdoor courtyard surrounded by OSF’s three separate theaters. “Right now, Hamlet is the one play that most modern scholars think of as Shakespeare’s best work. But it didn’t seem to have been thought of that way for at least its first 200 years or so. It was performed. But it was never thought of as the supreme Shakespeare tragedy until right around 1800 or so, when writers and critics of the Romantic period started to value such things as individuality, and alienation, and ‘interior monologue,’ as great qualities in a work of art. Many of those things—Prince Hamlet’s extreme sense of self-involvement, the play’s over-emphasis on the interior life of one character, its strange mix of comedy and drama—those things had always made the play seem weird, and sort of sloppy and weak. But, those virtues suddenly being valued rather than scorned, Hamlet suddenly seemed brilliant.”

According to Pollack-Pelzner, many other of Shakespeare’s “good plays,” were also once seen as the flip-opposite of “good.”

“People used to hate King Lear,” he said. “They thought it was unperformable as written, and way too bleak. It wasn’t until after the horrors of WWII that people began to appreciate Shakespeare’s vision of a world torn apart by madness in the seats of power.”

Timon, ironically, was once a very popular play.

“For what it’s worth, it was Karl Marx’s favorite Shakespeare play,” Pollack-Pelzner said with a smile. “He thought it was a brilliant articulation of the pernicious power of money, a condemnation of how the pursuit of money becomes a god to many people. I actually think this is a great time for Timon to reemerge, as the culture talks openly about economics and wasteful spending and the power of money to transform social relationships.”

Pollack-Pelzner adds that Timon’s star has been rising around the world ever since the global financial crisis of 2007-2008.

“Suddenly, Timon of Athens feels ripped from the headlines,” he remarked. “It now feels uncomfortably contemporary.”

So far, so good. A nice conversation with a guy who clearly loves Shakespeare as deeply as I do. But then, things got weird. When I informed Pollack-Pelzner that I had just completed the canon myself, he smiled the gentle smile of a man who’s become accustomed to letting people down gently.

“Well, as a Shakespeare professor, I have to say, OK, you think you’ve completed the canon—but what are you calling the canon?”

“Um, you know, the 37 plays that Shakespeare wrote,” I replied, fully aware that some purists consider The Two Noble Kinsmen to be Shakespeare’s 38th play, but confident that I could safely leave it off the list. None other than Bill Rauch, artistic director of the Oregon Shakespeare Festival, had assured me of it a year previously, when he announced that Timon of Athens would be one of the plays that would kick off OSF’s commitment to present all 37 of Shakespeare’s plays between 2015 and 2025.

I believe the way I put the question was, “I hope to see all of Shakespeare’s plays before I die, but I still have to see Timon and possibly The Two Noble Kinsmen. So, when I see Timon next year, do I have to keep going until someone does Noble Kinsmen, or can I go ahead and die?”

“Them’s fightin’ words,” said Pollack-Pelzner, when I shared this anecdote. “We have really good evidence that Shakespeare collaborated on a lot of plays, not just at the beginning and ending of his career, as we’d once thought. Some believe he contributed to, or wrote, several other plays not generally considered part of the canon.”

CLICK ‘HERE‘ TO READ THE FULL STORY IN THE PACIFIC SUN