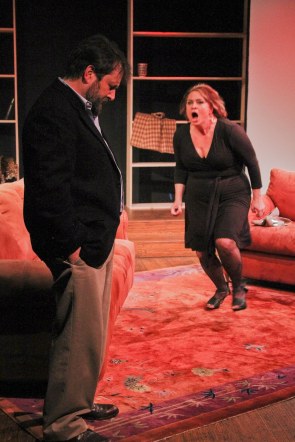 CAUSE AND EFFECT: George and Martha melt down in Main Stage West’s ‘Who’s Afraid of Virginia Woolf?’ (Photo by Eric Chazankin)

There’s a line that comes about halfway through Edward Albee’s classic play “Who’s Afraid of Virginia Woolf?” Unlike so much of the rest of Albee’s brutal and brilliant drama, it’s not a line full of anger or recrimination, or witty humor, or caustic observation.
As such, it stands out like a whisper in a rainstorm.
It’s uttered by an extremely inebriated young woman named Honey, curled up on a couch after a period of extreme alcohol-fueled nausea, making her barely-conscious remark in response to her host, George, telling a deeply personal story, which Honey’s own husband, Nick, told George less than an hour before, while Honey was indisposed in the upstairs bathroom.
As it so happens, it’s a story about Honey.
“This story sounds familiar,” she murmurs softly, unexpectedly adding, “Familiar stories are the best.”
Sometimes, that’s true, isn’t it? Sometimes, familiar stories are the best.
That’s why classics like “Who’s Afraid of Virginia Woolf?” keep cycling through our culture every so often. They might have been written 55-years-ago, like “Virginia Woolf,” but the good ones – like “Virginia Woolf” – always seem to have something to say.
Whatever familiarity you might have with Albee’s masterpiece, or with George and Martha and Honey and Nick – that furious foursome of funny-and-ferocious married academics whose relationships all unravel spectacularly over the course of single evening – you’d be well advised to leave your expectations – and perhaps your past disappointments – at the door of Main Stage West, where director David Lear and his first rate cast are serving up a dry and dirty, perfectly poured presentation of Albee’s caustic excoriation of modern marriage and the deadly addictiveness of illusion and deceit. 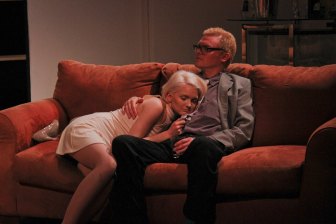 Notoriously difficult to stage, Who’s Afraid of Virginia Woolf? has nothing to do with the titular author, whose name only appears here in references to a joke made earlier in the evening—a joke we never hear ourselves. George (a sensational Peter Downey) is a middling history professor, and his wife, Martha (Sandra Ish, marvelous), resents him for his lack of academic ambition. One morning, following a lengthy faculty dinner, George and Martha invite another couple over for drinks. Nick (John Browning, strong in a difficult role) is a new biology professor, and his wife, Honey (Roberts), well, Honey has a habit of throwing up when things become too “intense.”
As George and Martha callously use these wide-eyed newbies as ammunition in their bitter, decades-long battle of disappointment and regret, Lear masterfully keeps the tone light, recognizing that the escalating cruelty of these angry people’s witty but pain-fueled words works best when delivered as if it’s all actually hilarious—which it frequently is.

The Main Stage production includes Ish’s priceless expression when Honey, having just arrived with Nick, places a potted Venus flytrap in her hand as a “hostess gift.” And words cannot describe Roberts’ jaw-dropping brilliance when Honey launches an improvised dance that includes elements of ballet, hand-jive and a mime stuck in a box.
The brilliance of Albee’s script, and this razor-sharp interpretation, lies in the awareness that beautiful truths can be found even among people as vile and hateful as these.