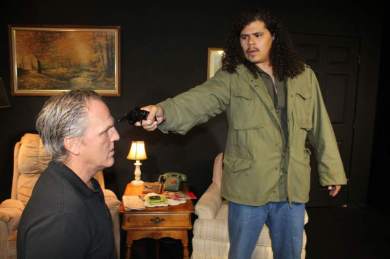 “Before we called it PTSD, people with post-traumatic stress syndrome were just considered weirdos, people who couldn’t or wouldn’t shake off their bad experiences,” says Sonoma director-actor-teacher Jim Jarrett. He’s the director of the acclaimed wartime drama “Home Front,” which will be running five consecutive days next week at Andrews Hall, presented by Sonoma Arts Live. Written by James Duff, the acclaimed 1984 play – adapted in 1996 into a film starring Martin Sheen, Kathy Bates and Emilio Estevez – takes place over 24-hours in the life of an American family, shortly after their son’s less-than-smooth return from the Vietnam War.

The London Sunday Times praised the play’s Broadway debut, calling it, “A comedy of manners, a play that matters,” while the New York Post said, “”Home Front” is a play you will never forget.”

“Back during Vietnam,” says Jarrett, “people used the term ‘shell shocked’ to describe veterans with PTSD, but they mostly blamed the victim, saying he just refuses to integrate, or he drinks too much, or he’s just a mess or a nutcase.”

Though much has been learned about post-traumatic stress since the premier of “Home Front” 33 years ago, Jarrett believes the play still stands as a powerful document of how families can be affected by the horrors of battle – even when only one family member actually went to war.

Jarrett, seen recently in Sonoma in the one-man-play “Vincent,” is the founder of the Meisner Technique Studio, where he estimates he’s trained hundreds of actors in the method originally developed by Sanford Meisner. He first became aware of “Home Front,” the play, two years ago, when one of his graduates, San Francisco’s Santiago Rosas, approached him to ask for assistance in producing the show. 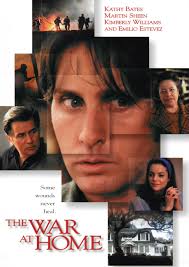 “Santiago is a class act,” says Jarrett. “He is one of the most hard-working actors I’ve ever trained. He came to me, telling me that he’d discovered this play called ‘Home Front,’ that it really resonated with him, and that he’d like some help in putting together a run of it. He said there was so much in the story that he identified with, and he thought it would be meaningful to others too.”

Jarrett, it so happened, had been looking for a project about veterans and PTSD. He’d become interested in the subject ever since encountering a young woman whose husband was a serviceman in Iraq.

“It was several years ago,” he says. “This woman interviewed with me in San Francisco, hoping to come study acting with us – and she told me that her husband was coming home soon from overseas, after serving three tours in Iraq.”

The couple had three children, and she’d been holding down the home while he was away.

“So he said to her, ‘I’m coming home. And now it’s your turn. Time for you to go after everything you need and want, and I will support you,’” Jarrett says. “She told him that she’d always dreamed of pursuing acting, and he said to go for it.”

Unfortunately, after enrolling, the would-be actor only attended two classes before suddenly quitting.

“She came in, in tears,” says Jarrett, “telling me her husband’s PTSD was so intense he wasn’t able to take care of the kids, or take care of the home, not the way he needed to. So she quit her classes. I saw this woman give up on her dream, and I recognized that what I was witnessing was the other side of war, the other side of post-traumatic stress syndrome. I saw that war has all kinds of victims, and those include the family members of the veterans who serve our country.”

It was, Jarrett says, like a punch in the gut.

“I felt so badly for her,” he says. “And I realized that, to some degree, this same story was happening all over the country, including right here at home in Sonoma County.”