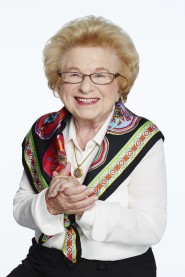 That description, apparently, applies to Westheimer herself.

Throughout the unexpectedly rich script by playwright Mark St. Germain, the true details of Dr. Ruth’s extraordinary life are revealed, strip-tease-style, one bit at a time. As the play opens, Westheimer is packing up her New York City apartment after the recent death of her third husband, Fred. In the midst of arguing on the phone with her daughter, she suddenly notices the audience.

“Hold on,” she tells the caller. “I have company.”

What follows is as loose, relaxed and occasionally bizarre as an actual living-room conversation with an eccentric friend—one who, in this case, just happens to have escaped Nazi Germany as a child, spent years as a sniper for the Israeli army and worked for Planned Parenthood in New York, all on her way to becoming America’s most unlikely advocate for positive sexuality and honest, open discussion about a subject few people actually talk about.

As Dr. Ruth, Ann Woodhead is wonderful. Though with a bit less energy and volume than the way Westheimer so delightfully comports herself on TV and radio, Woodhead skillfully captures the famous figure’s twinkly-eyed and straightforward approach to life, laughter and love, and even her clear-eyed embrace of the uglier facts of life. She simultaneously nails the parade of one-liners, and carefully modulates the heavier elements, which includes the death of Ruth’s family in the concentration camps. After she escaped to Switzerland via the international Kindertransport rescue effort, Westheimer never saw her parents again.

The direction by Elizabeth Craven is generally light-handed and purposefully simple, with clever use of projections to emphasize the moments when Dr. Ruth shows photographs of her family. The effective set by David Lear is crammed with thoughtful visual details, though the show’s unnecessarily busy, uncredited light design is frequently baffling and distracting. That said, the light of the show, appropriately enough, is the real Westheimer, whose sheer lifelong determination and resilience is entertainingly moving, illuminating and truly inspiring.