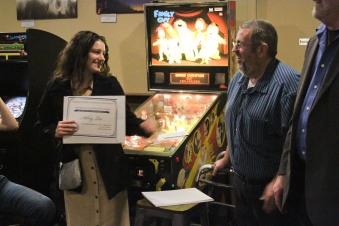 Sonoma’s Abbey Lee has won the award for Outstanding Supporting Performance in a Musical by the Sonoma County-based Marquee Theater Journalists Association. A 2007 graduate of Sonoma Valley High School, Lee was honored by the MTJA for her work in 6th Street Playhouse’s recent production of the Marx Brothers’ musical “Animal Crackers.”

“I’m really thrilled,” says Lee. “It means so much to be recognized. I know everyone says that, but it’s true. It’s a wonderful thing to give so much to a show, and to work so hard with all of your other castmembers, and then to have that work acknowledged by your peers – or in this case, by the theater critics. It’s just a really nice thing.”

The inaugural awards event was held Nov. 14, at the Local Barrel taproom in Santa Rosa. In attendance were representatives and supporters of 11 Sonoma County theater companies.

Nominations were culled from shows staged between September 2015 and August 2016.

The MTJA – comprised of theater writers in print, radio and online formats – was formed in September of 2015. At the event, the group presented 14 awards, divided into categories for Outstanding Drama, Comedy and Musical. Unlike similar awards programs, the performance nominees are not separated by gender, so Lee’s co-nominees included Adam Blankenship, nominated for his appearance last year as The Balladeer in Sonoma Arts Live’s co-production, with Narrow Way Stage Company, of Stephen Sondheim’s “Assassins.”

Lee – who works as a tasting room associate at Benziger Family Winery – says she’s always loved theater, but was hardly known as a theater kid while in high school.

Abbey Lee as the scheming Mrs. Whitehead, with Lydia Revelos

“I was a brainy, leadership, always-carrying-books, always getting-good-grades kind of kid,” she says. Since graduation, however, she’s been building a solid reputation as a triple-threat – singing, dancing and acting her way through roles all over the North Bay. Local theater-goers might remember her as Sally Bowles in Experimental Theater Company’s 2013 staging of “Cabaret” at the Sonoma Community Center. Since then, she’s played Nancy in Lucky Penny Productions’ “Oliver!”, Susan in the offbeat meta-musical “[Title of Show]” and many more. She just completed a run as Janet in 6th Street Playhouse’s bawdy “The Rocky Horror Show.”

None of that, she says, prepared her for playing two very different women in the musical made famous by the Marx Brothers, first in a hit 1928 Broadway show, then in the famous 1930 movie. In what the MTJA identified as a tour-de-force dual-role performance, Lee played both the love-struck ingénue Arabella Rittenhouse and the scheming socialite Mrs. Whitehead.

“I was so excited to jump into it,” Lee says. “I’ve done a lot of musical comedy, but the Marx Brothers was a new kind of adventure to dig into, seeing how so much of today’s comedy owes a debt to the Marx Brothers.”

It took more than just acting to play the twin roles, Lee points out.

“The quick changes were outrageous,” she says. “I had maybe eight complete changes, including wigs, make-up and mole I had to add and remove and keep track of, so the wrong character didn’t walk out on stage with or without her mole, depending. I almost never stopped during the show. It was very athletic.”

Awards aside, Lee says all the work was well worth it.

Says Lee, “I have to say those two women are probably my two favorite characters I’ve ever played.”