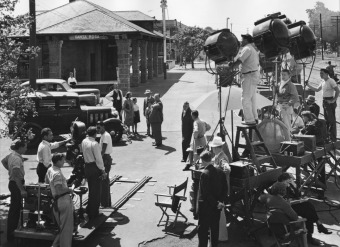 There’s no doubt about it.

Whenever Sonoma County residents talk about Alfred Hitchcock, and the extraordinary films he made here, the conversation almost always alights on “The Birds,” the classic shocker Hitchcock filmed in Bodega in 1963. That cinematic flight of horrific fancy is not the only movie Hitch helmed in the area, however.

In 1948, exactly 20 years before he so memorably locked Tippi Hedren in a room with a flock of crows and pigeons, he’d already trapped Theresa Wright in a Santa Rosa garage with an Oldsmobile spewing carbon monoxide, and made Joseph Cotton appear from a cloud of train smoke at Santa Rosa’s Railroad Square.

The film was “Shadow of a Doubt,” often named by Hitchcock as his personal favorite of all of his films. Considering he made some of the greatest mystery-thrillers of all time, that’s saying something. 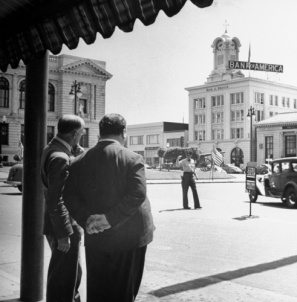 “Shadow of a Doubt” will screen at the Sebastiani Theatre, on Monday, Nov. 14, at 7 p.m. The movie was filmed in and around Santa Rosa, with distinctive locations including that iconic train station, numerous downtown streets and sidewalks, a number of public buildings – courthouse, library, theater – that no longer stand and one very large, slightly spooky house, with wraparound deck and aforementioned garage, still located at 904 McDonald Ave.

The film, with gorgeous black-and-white cinematography by Joseph A. Valentine (“The Wolf Man,” “Saboteur,” “Joan of Arc”), is a twisty mystery about a bored young woman (Wright) from Santa Rosa – named as such in the movie – who begins to suspect that her visiting Uncle Charlie (Cotton) is a serial killer of rich widows. Along with a deliciously unpredictable script by Thornton Wilder (“Our Town,” “The Skin of Our Teeth”), crammed with witty 1940s dialogue, and stuffed with subtle explorations of the darkness that lies beneath the mythic picture of small town America, “Shadow of a Doubt” is worth reviewing from time to time. Not just for Hitchcock’s brilliant eye and pitch-perfect pacing, but also to remember what a piece of Sonoma County looked, sounded and felt like over 70 years ago.

This story appears in the Sonoma Index-Tribune