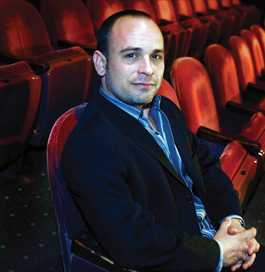 “Don’t get me started.”
Jasson Minadakis, one quickly notices, uses that phrase a lot.
“Don’t get me started.”
For the record, when it comes to talking about theater—especially the kind of expectation-defying, definition-challenging, artistically fearless theater Marin Theatre Company (MTC) has become known for over the 10 years that he has served as its artistic director—it is not at all difficult getting Jasson Minadakis started.
On this particular afternoon, MTC’s energetic artistic director has taken a bit of time out between rehearsals to talk about his first decade at the helm of the North Bay’s premium professional theater company. Throughout the conversation, he recalls various plays he’s produced or directed along the way. He’s just been discussing, for example, last year’s production of Tarell Alvin McCraney’s Choir Boy, which—the night before this interview—was awarded the prize for Best Bay Area Production at the annual awards party thrown by the San Francisco Bay Area Theatre Critics Circle. Out of nine awards won by MTC, including honors for The Convert and The Oldest Boy, Choir Boy took home a total of six, including one for Jason Sherwood’s amazing set design.
The set, as has been much discussed throughout the Bay Area theater community, incorporated several working shower stalls, which appeared to produce actually steaming-hot water.

“Oh, that was hot water, definitely,” Minadakis says. “It was an important part of the overall design of the show. We wanted real water, and it had to be hot water, because we wanted to see the steam rising as the actors went through that particular scene. Realism is extremely important in telling particular stories. And realism is often very, very complicated to carry out effectively.
“But don’t get me started.”