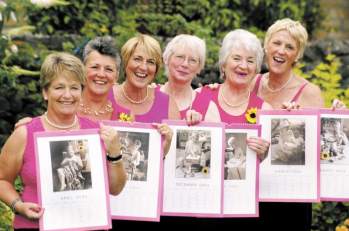 “The movie ‘Calendar Girls’ is about women who stepped out of their comfort zone,” says Jaime Love, executive artistic director of Sonoma Arts Live, “so we’re offering the women of Sonoma an opportunity to follow that example, by stepping out of their own comfort zones.”
This, of course, means stepping out of their clothes.
According to Love, the first show of SAL’s spring season will be Tim Firth’s “Calendar Girls.” The play, adapted from the hit 2003 movie, tells the true story of a dozen proper English ladies from North Yorkshire, who set out to raise money for their local hospital by posing in clever ways for a tastefully suggestive calendar.
As a tie-in to the local production, and as a benefit for Sonoma Valley Hospital, Love has teamed up with local fundraiser Mara Lee Ebert to create a version of the infamous calendar, featuring Sonoma Valley women. All she needs now are the models, whom she describes as women between 40 and 60, willing to follow in the footsteps of the famous “calendar girls” from England.

As told in the movie and the play, those original calendar girls, all members of the Rylstone Women’s Institute, overcame a mountain of obstacles, from overprotective husbands to outraged townsfolk. The modern day Ladies Godiva did, eventually, produce their calendar, becoming instant celebrities in the process. The artfully designed calendar went on to sell more than 88,000 copies in England in 1999. The following year, an American version was printed and, following the women’s appearance on “The Jay Leno Show,” the new calendar sold more than 200,000 copies.
“What people embraced,” says Love, “wasn’t just that these middle-aged women were sort of naked, with teapots and things blocking the naughty parts, but that they were pushing themselves to do something outrageous for a good cause. And the validation they received for how sexy they were made them all realize that, hey, ‘We’ve still got it.’”

Click ‘Here‘ to read full story in the Sonoma Index-Tribune