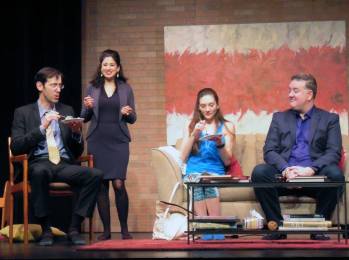 As theatergoers, we occasionally attend plays we never previously liked—and end up changing our minds by the end. Maybe exceptional acting somehow assists the script in transcending its limitations, or the directing cleverly alters the show to make some powerful social statement, finding some new way to show us something we’d not noticed in previous productions. For me, Yazmina Reza’s acclaimed dark comedy God of Carnage has always been such a play.
I don’t like it.
I’ve never liked it, and its 2009 Tony award for Best Play continues to perplex me.
Still, I am quite willing, eager even, to be proved wrong. As a theater writer, and a theater fan, nothing is more exciting than being proved wrong.
Which brings us to Left Edge Theater’s rambunctious new staging at Luther Burbank Center. Unfortunately—though I did enjoy a number of things about the production—its intermittent pleasures were not enough to change my view that Reza’s satirical stab at modern social relationships is poorly constructed, lacking in true insight, and ugly to a fault. And no, graphic onstage vomiting—though entertaining in a way, and very well done here—does not qualify as a social statement.

Though it is pretty funny.
The underlying concept of the play certainly has merit.
Two pairs of suburban parents meet to discuss a playground scuffle between their two eleven-year-old sons. After initial attempts at civility, the convivial conversation quickly devolves into caustic verbal attacks, vitriolic blame slinging, blatant displays of marital discord, some abusive treatment of inanimate objects, and general drunken mayhem. The point, such as it is, is that civilization is a fairly weak and flimsy construct. Though we have become domesticated by the artificial constraints of society, we are all just one step away from the kind of brutal behavior that defined our warring, primitive ancestors.
That’s hardly a fresh message.
From ‘Lord of the Flies’ to ‘The Hunger Games,’ the subject has been pretty fully excavated. Heck, anyone who watches a Donald Trump speech might come to the same conclusion. That’s all right, in and of itself. Theater and literature repackage old messages all the time. The goal, though—one would hope—is to do it in a way that is fresh and clever, or at the very least, fun to watch. 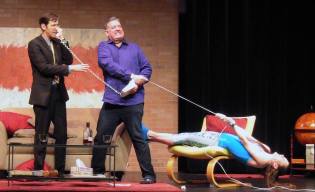 As the parents of the young victim, Ron Severdia and Melissa Claire exude varying levels of passive-aggressive hostility from the get-go. Heather Gordon and Nick Sholley, the parents of the attacker, convey palpably miserable frustration. Overall, despite their efforts, the script does not allow these characters any of the likability necessary for audiences to identity with these people, a vital factor in effective satire.
Under Argo Thompson’s lean, unfussy direction, the four-actor cast clearly works hard to keep things light, playing their characters’ essential repugnance slightly over the top, straining hard to make the most of the jokes Reza has buried in her script’s quicksand of verbal meanness. But there are few real opportunities for levity here, and despite a few inspired moments of physical comedy—including the aforementioned vomiting scene and its messy aftermath—all that’s left for the actors is to illuminate the moments of dark humor in the dialogue.
Thompson’s direction does bring a bit of a fresh perspective to the material, depicting the characters’ abrupt slide into bad behavior, not as a shocking surrender to primal savagery—as portrayed in other productions—but as a goofy, tantrum-tossing, sulking-and-pouting eruption of childishness. That’s a smart directorial choice, but it’s just not enough to balance out the bland cynicism of Reza’s viewpoint, or to change my mind that God of Carnage, even when reasonably well done, has worse problems than not being very funny.
Sadly, it’s just not that good of a play.

‘God of Carnage” runs Fridays and Saturdays through April 2, at Luther Burbank Center. Details at www.leftedgetheater.com