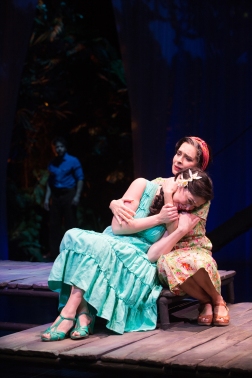 “Love is for the bold! You have to be willing to risk everything!”

So exults Belmira, an impetuous young bride-to-be, in an evocative early scene in Marisela Treviño Orta’s stunning The River Bride. It’s easily the best new show in a strong current batch of four that just opened the Oregon Shakespeare Festival, in Ashland (where seven more shows will be added throughout the year).

With her line about love and boldness, the flirtatious Belmira is speaking of romance and escape, but she could just as well be describing the artistic risks taken by Orta with her extraordinary script, first staged in San Rafael in 2014, now given a magical makeover in Ashland by director Laurie Woolery, and a first-rate team of theatrical artists.

Click ‘Here‘ to read full review in the Pacific Sun