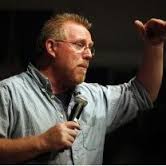 David Pokorny once traveled the highways of America, living out of hotel rooms and telling jokes every night in comedy clubs large and small.

Today, the stories he tells about that time on the road are priceless and often feature memories of working with major stand-up comics from Robin Williams and Bill Maher to Paula Poundstone and Will Durst. Though Pokorny still finds ways to mine the humor in his life as a husband, father and grocery store manager – he might have made you laugh in the checkout line at Petaluma’s Whole Foods Market – he’s more than comfortable just staying at home in Petaluma.

That’s where, as the host and producer of the wildly popular West Side Stories program, he shares some of those stories. Taking place the first Wednesday of every month as Sonoma Portworks in the Foundry Wharf, West Side Stories is a live storytelling competition along the lines of NPR’s sensational Moth Radio Hour that often sell out in advance of the event.

“When you pick up your ticket at the door,” Pokorny explained over a glass of wine at Le Dolce Vita Wine Lounge in the Theater District, “we ask if you have a story to tell, and if you do, your name basically goes in a hat, or actually, on a card. If your card is chosen, you come up to mic and have five minutes to tell a story. It has to be true, and you can’t use notes. Those are the rules. And it’s awesome. Some people will keep their personal lives to themselves, but if you make it about telling stories, they will stand up and describe most amazing, personal, hilarious, embarrassing and beautiful things. I’m blown away every single month.”

Click ‘Here‘ to read full story in the Petaluma Argus-Courier