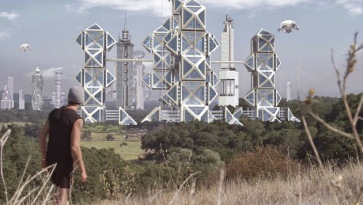 November 8, 2015 — In its first week online as a free streaming video, the short film ‘NEW,’ by Santa Rosa filmmaker John Harden, has been watched by over one-thousand people.
“We’re having a great first week online,” Harden recently posted.
That’s an understatement. In a social media landscape where videos are often posted to a dozen or so views in their first month, the high-trending 1000+ viewership of ‘NEW’ is nothing to sneeze at, and lends fuel to Harden’s dream of turning the short film into a feature-length version. The script, already written, just needs the support of investors excited by the award-winning filmmaker’s vision.

‘NEW,’ filmed in Sonoma two years ago, and garnering intensely positive responses at a number of world-wide film festivals, tells the story of an elderly couple who die in the early 21st century, and after two centuries of cryogenic refrigeration, are revived in new twenty-something versions of their original bodies. After an initial period of ‘future shock,’ mingled with the heady thrill of being able to do things that, even when they were alive, they hadn’t been able to do for years (jogging, for one, along with joyous, overnight bouts of sex), the couple begin to realize a few things about what it meant to grow old together, and what they’ve lost now that they are “new” again.

Check it out by clicking ‘Here.’ And follow John if you want to be part of his dream to supersize ‘NEW.’