“I think it was one of the best roles Hugh Grant has ever had,” declares Richard Connema, praising Grant’s recent work in the new film Florence Foster Jenkins—directed by Stephen Frears (Dangerous Liaisons, High Fidelity, The Queen)—in which Meryl Streep also stars. “I think Grant deserves an Oscar for it. And that kid, the piano player, the actor from The Big Bang Theory. What was his name?”

“Simon Helberg,” I reply. “He plays Wolowitz on Big Bang.”

“Right. Big Bang. He was terrific.”

And then, of course, there’s Meryl Streep.

“Wow! Was she outstanding or what?” Connema says. “Just wonderful to watch. She’ll definitely get another nomination, and she deserves it. She’s incredible in this.”

Connema, of San Francisco, is a longtime member of the San Francisco Bay Area Theatre Critics Circle, and a former photographer for Warner Bros. His professional career dates back to when the likes of Vincent Price, Hedy Lamarr, Ronald Colman and the Marx Brothers roamed the Warner’s lot in Los Angeles. At age 89, Connema remains an energetic consumer of entertainment, regularly catching more than 100 plays a year, and at least as many movies and concerts. He has been particularly eager to see Florence Foster Jenkins, a somewhat fictionalized biographical homage to the late New York soprano and opera buff who the New York Post once dubbed, after a historic concert at Carnegie Hall, “The worst singer in the world.” The concert in question, recreated in the entertaining and touching film, took place on the evening of October 25, 1944. 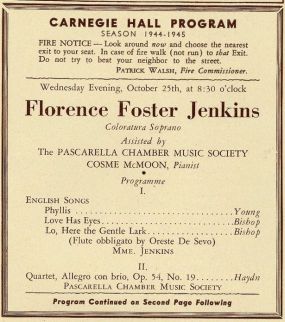 Connema has personal knowledge of what really took place that night.

Connema states this with a kind of auditory twinkle in his voice and a hint of mischief in his words, clearly the promise of a whopper of a tale about to be told. In 1944, Connema was indeed present at Carnegie Hall, a first-person witness to an event now captured—if significantly altered—in cinematic glory.

“It was quite a scene,” he says. “And yes, she really did sing like that—like a cat in heat, with her slightly askew arms, lifting and flailing with the grace of a flightless bird. She decimated the musical scale.”

It would be prudent, at this point, to point out to readers that what follows contains a number of spoilers. If you plan to see the film, consider saving this column and reading it in full after the movie.

At the time of the concert, Connema was stationed at Fort Dix in New Jersey, where he was undergoing training to become a combat photographer for the U.S. Army. This was at the height of World War II.

“Two of my buddies and I would go into Manhattan on weekends,” he recalls, “and together we would head to the USO on Times Square for free Broadway show tickets. We were given orchestra seats to the Florence Foster Jenkins event. Of course, I already knew who she was. I had both of her records. As an opera fan, I couldn’t believe it. I couldn’t get over how tone-deaf she was. So I was anxious to see her in concert, just to find out if, you know, maybe she’d improved.” 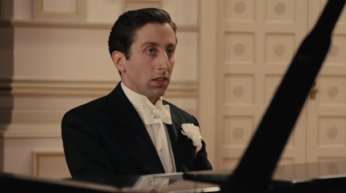 Jenkins was a wealthy heiress and society matron who gave generously to musical causes, underwriting projects by the famous conductor Toscanini and others, paying top dollar for singing lessons from the top concert professionals in New York. The founder of the Verdi Club, she gave annual recitals to invited guests and members.

Supported by her common-law husband St. Clair Bayfield (played in the movie by Grant, who is truly excellent), and a variety of others, including her faithful accompanist Cosmé McMoon (Helberg, also remarkable), Jenkins (Streep) was, in many ways, the butt of a huge conspiracy. The likes of Cole Porter often attended her recitals, but claimed he had to stab himself in the foot with his cane to keep from laughing out loud. Behind her back, she was a laughingstock.

“I think a lot of her friends told her how good she was, just out of love and kindness, genuine affection,” Connema surmises. “And of course, she was supposedly pretty happy. She did her concerts, people told her how marvelous she was and the checks kept coming to all of the people she was supporting with her contributions. So it was of them selfish, too, but everyone benefitted from the arrangement.”

It was only after taking the stage at Carnegie Hall—which she rented for the night, selling out the place in addition to giving 1,000 tickets to servicemen—that the real-life Jenkins came face to face with reality.

“Stephen Frears added a few dramatic extras to that concert scene,” Connema points out. “The film does a disservice to the men in uniform who were there. It shows them all coming in drunk, shouting and misbehaving before the concert even began. That wasn’t true. There were maybe a few that were tipsy, but with Jenkins giving 1,000 free tickets to the military, there were MPs out in the lobby, and they wouldn’t have let anyone in who behaved the way they do in the movie.

“And that woman who stands up in the film, once the concert started and they all started laughing at her,” he goes on, “She turns around and tells all of the servicemen to give her a break and be quiet. Nothing like that happened at all. There was snickering for the first song, but the mayhem didn’t break out until around the third song, when the guys in the balcony couldn’t contain themselves anymore.”

The movie shows Jenkins rallying, and turning the concert into a success by force of sheer will, transforming the scoffers into fans who ultimately cheer her for her courage. In reality, says Connema, she was laughed off the stage in the middle of the sixth number, and never returned. 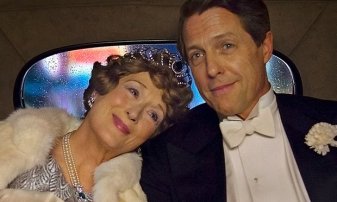 “I think she realized, at that moment, that she’d been made a fool of,” Connema says. “Streep played it brilliantly. I think it wasn’t necessary to add all of that extra stuff, or the thing about her husband hiding the newspaper reviews in the morning. They did that for dramatic effect or something.

“But believe me,” he says, “as someone who saw the actual look on her face at that moment, what actually happened that night was plenty dramatic enough.”

This piece originally appeared in the Pacific Sun