Visually inventive and sensitive to a surprising degree, writer-director Mary Zimmerman’s surprisingly rich ‘Treasure Island’ — adapted from Robert Louis Stevenson’s novel — literally rocks the boat, employing a stunningly well-engineered stage that swings back and forth like a ship rolling on the ocean. That’s just one of many surprises awaiting audiences, young and old, as Zimmerman (‘The White Snake’) sets sail at Berkeley Repertory theater, where it runs through June 17. With Zimmerman as confident captain, the show embarks on a kind of theatrical treasure hunt, searching for the buried beauty, pathos and human comedy in the classic tale of a boy who befriends a pirate while on an ocean journey that will test his morality, and turn him into a man.

Ironically enough, much of beauty and poetry that Zimmerman mines from the 185-year-old adventure isn’t actually present in the novel.

Truth is, for all its nostalgic power and enduring appeal, ‘Treasure Island,’ the book, is a fairly straightforward, even somewhat shallow work of fiction. That’s not to take away one fathom of the book’s standing amongst the greatest YA novels of all time. I personally love ‘Treasure Island,’ and can trace my own lifelong affection for pirate stories straight back to Jim Hawkins, Billy Bones, Ben Gunn and Long John Silver.

But even after giving full credit to the full-meal-feastiness of Stevenson’s masterpiece, with its rousing storytelling and indelible imagery, one can hardly say that ‘Treasure Island’ is a deep book, despite the great depth of fondness so many may feel for it.

That is why it’s such a surprise, amongst the many wonders and surprises awaiting in Berkeley Rep’s blockbuster production, that Zimmerman has turned the story into something so achingly lovely, sweet, occasionally weird, and (frequently) a little bit upsetting and even disturbing. 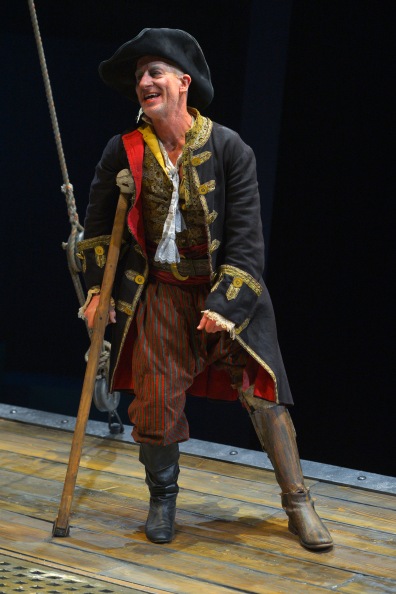 The set by Todd Rosenthal (start sending awards his way immediately) is a deep, curved slab suspended from the rafters, with various ship’s riggings and ropes sprouting in all directions. It’s a versatile set, hinting at the pirate ship it will eventually represent, while serving perfectly well as the Admiral Benbow Inn, where young Jim Hawkins (John Babbo, appropriately soft, naive and fearless) encounters the frightening ex-pirate Billy Bones (Christopher Donahue, pitch perfect). Eventually, Jim and and a few wealthy townsfolk (the brilliantly multileveled Matt DeCaro as Squire Trelawney, and the pleasantly stalwart Alex Moggridge as Dr. Livesy), “inherit” Bones stolen map to a remote island where the villainous Captain Flint is believed to have brief a king’s fortune, after which he died.

The rest is the stuff of legend, familiar even to those who’ve never read the book through a series of movies and television shows that include versions featuring Muppets, and another set in outer space.

After engaging a friendly one-legged cook shamed Long John Silver (Steven Epp, extraordinary in the way he both encompasses and defies pirate clichés at the very same moment), Jim Hawkins and his fellow adventurers, including Captain Smollet (Phillip R. Smith, convincingly capable) all head our across the bouncing sea.

When the marvelous swing-set stage begins to move for the first time, with actors at either side purposeful rocking the set from side to side, it’s easily one of the most electrifying moments of the theatrical season so far. It so spectacular, in fact, that in a lesser show, the set might have upstaged everything that took place on it. Not so with this ‘Treasure Island.’ 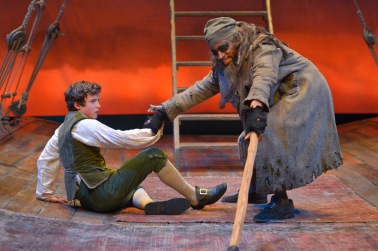 Zimmerman, in stripping away a number of the novel’s subplots and tangents to focus on the experiences of Jim Hawkins, ends up creating something far more emotional than  the book on which it’s based. As a result, it must be said, what remains is perhaps a bit less swashbuckling and rambunctious than the original story. Far more interested in Jim’s inner life than the sword fights and gun battles he witnesses (and occasionally participates in), this ‘Treasure Island’ slows things down enough that we feel Jim’s painful conflict when he is forced to kill someone for the first time. When that moment occurs, late in the show, the story (and the swinging set, and the live music accompanying the scene) literally stops—dead silence taking over as Babbo, simply but competently portraying Jim’s mental journey, steps off the stage, slowly walks all the way around it, then steps back up as the scene, and Jim’s new life as a man who has killed, begins. 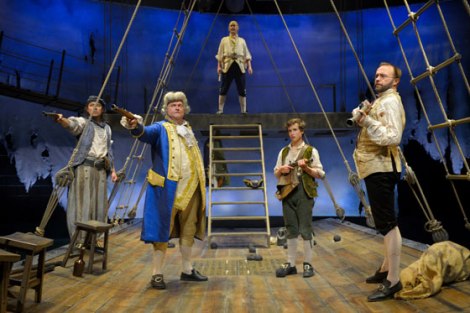 Zimmerman packs the show with similar moments. Squire Trelawney, who in most adaptations is simply a blustering fool who’s choices endanger the company, is for once allowed to grow as a character. DeCaro clearly and effectively shows Trelawney struggling to shoulder his heavy burden, as be becomes reluctantly aware of just how much his mistakes have cost the people he cares for.

Some of Zimmerman’s touches are a bit bizarre, though still oddly moving, as when Jim experiences a dreamlike journey in a small boat, the tossing the waves illustrated in a kind of pirate ballet, as a shirtless Long John Silver dances Jim across the stage, turning and twirling him over his head. I’m not sure what Robert Louis Stevenson would have thought, but there’s no denying the strange emotional power of the scene. 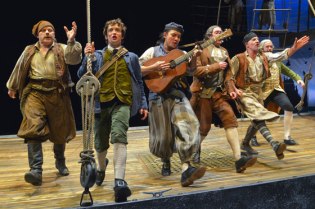 Not all of Zimmerman’s low-tech innovations are quite so successful. When the action moves from the ship to the island, the synchronized motions of the crew, slowly tucking  fake green leaves into the various ropes and supports of the set, only called attention to how little the result resembled a jungle island. It brought a rustle of disbelieving laughter from the audience, as well. Likewise a moment when a low flying parrot puppet takes a shot, feathers flying. It should not have been a funny moment. But it is.

Still, such clunky moments aside, this is an exceptional entertainment. The strong, multidimensional acting is a perfect partner to Zimmerman’s thoughtful storytelling. Fans of the book may miss the ferocious fervor of its boyish daydream energy, perhaps preferring a bit more blatant bloodshed over all that tenderly crafted artistry. I’m in the middle on that. Doesn’t matter. Pirates stories should be thrilling, and this one is, bringing to an oft-told tale something rarely attempted with projects such as this. Because of Zimmerman’s gorgeously satisfying, wholly unfamiliar vision of ‘Treasure Island,’ we who know it so well are granted an opportunity to experience the familiar this beloved old story through fresh, appreciative new eyes.