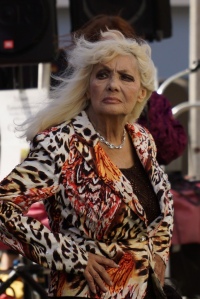 Twenty years ago, in 1995, I picked up Carol Doda.
Literally.
The pioneering stripper and “adult” entertainer was waiting for me at the side of the road in the San Francisco, where we’d arranged to meet before going to see the now-notorious movie ‘Showgirls.’ The movie was a hot ticket, freshly landed in theaters, and everyone was curious. Including Doda. She was delighted by my invitation to escort her to the film, and the resulting pre-andpost-film conversation is amongst my favorite interviews of all time.
With news that the legendary Doda has passed away, at the age of of 78, I believe this is an excellent time to rerun that column from two decades ago. I hope you enjoy it.
Fasten your seat belts.

“This is good. I almost never go to movies anymore. I’m too damn busy,” sighs Carol Doda, slipping into my car for the ride across San Francisco. We’re on our way to see the racy new musical Showgirls, much hyped for its unapologetic use of nudity. Doda, of course, is the charismatic and legendary singer/dancer who, in the early ’60s, brought topless dancing into the mainstream with her groundbreaking shows at the North Beach District’s Condor Club and whose then-unheard-of use of silicone implants gave her a 44-inch, tourist-attracting bust that was at one time insured by Lloyd’s of London for $1 million. Doda, certainly, is the most appropriate companion for this particular film.

It has been 10 years since Doda left the Condor Club after a 20-year reign as the Queen of Broadway. Since then she has taken on countless projects and business endeavors, including her leather-clad rock group Carol Doda and Her Lucky Stiffs. Then there is her Union Street lingerie shop (Carol Doda’s Champagne and Lace Boutique) and an adults-only telephone fantasy line (Carol Doda’s Pleasure Palace). She has put together a radio show called “Single in the City.” which she plans to syndicate nationally, and she’s writing a live stage show in which she will portray fellow sex symbols Marilyn Monroe, Mae West, and others.

She wasn’t kidding about being busy.

We arrive at the theater early, and end up at a nearby diner to kill some time. I ask about her lingerie business, which, I am informed, is about to go high-tech with a new on-line catalog service.

“There are a couple of unusual things about my store,” she explains. “One is that we have all sizes: small, medium, large, full figured. Bra sizes used to be just 32, 34, and 36–A, B, and C. But now, people come in needing D’s, E’s, F’s, double F’s, G’s, and H’s. You wouldn’t believe it! We carry them all. I also have a lot of customers–men–who are cross-dressers, and that’s just fine with me. If somebody says, ‘Don’t you mind when a man comes into your shop wanting a bra?’ I say, ‘Hey! I wouldn’t mind if a hippopotamus came in wanting a bra, as long as he has the money.’ I mean what the hell are clothes anyway? Who cares what people wear?”

Doda has a long-held reputation of being a first-class, natural-born businessperson. In 1974 she was even voted Businessperson of the Year, for her “Asset Management,” by the Cambridge Club at Harvard University. It is a label she shrugs off.

“I’m just logical,” she says. “If you have to fend for yourself, you make the decisions that make sense. I did the breast implants way back when because I knew it would make my show better, and now I sell women’s apparel to whoever wants it, because it doesn’t make sense not to. I’m not out be some great businesswoman, but, you know, survival is survival. Which, I expect, is what this movie is about.”

Showgirls tells the tale of two feuding Las Vegas showgirls, Nomi Malone and Kristal Connors, who will stop at nothing and will bare everything to beat each other out on their way to the top. It is a glitzy, entertaining, thoroughly silly film. And . . . um . . . yes, there are more naked breasts per square inch than I have ever seen on screen.

“Really? I barely even noticed it,” laughs Doda as we leave the theater. “I wasn’t bothered in the least. As if I’m going to protest a little nudity, right?”

As we drive back to her shop, Doda admits to enjoying the film.

“All in all, I thought it was very well done. It entertained me. The nudity all made sense, though they may have embellished it a bit. The backstage stuff– don’t know how realistic that was. The dancers I know never paraded around naked saying, ‘Here I am, here I am.’ We were getting paid to take off our clothes in front of an audience. No one paid us to be naked backstage. I’m not going to run around nude unless someone is paying me. To hell with it!

“I must say though,” she adds, “that I did streak once, in the ’70s, as a publicity stunt. I was totally embarrassed doing it! I ran down the Marina Green wearing only argyle socks and sneakers. It was very uncomfortable for me. But put me on a stage . . . I’m not embarrassed a bit. As long as people are paying so see my naked body, I don’t care. Let them look.”

Nomi, Showgirls’ tough-talking dancer from nowhere, has a similarly practical sense of modesty, though her drive for stardom takes her way beyond mere stripping. “I’ve seen a lot of girls like Nomi,” Doda notes. “Dancers with that hard-edged, been-around, on-the-streets attitude. The business can hurt you if you’re not careful. The movie depicts that pretty well.

So my final pronouncement has to be that I liked it. I liked it. But then I wasn’t expecting to see War and Peace.” She laughs. “Though, you know, there were a lot of wars going on, and we saw a lot of pieces.” She’s on a roll now. “And how come we never saw the men naked? I mean, fair is fair, right? Tit for tat.” She laughs again. “So to speak.”