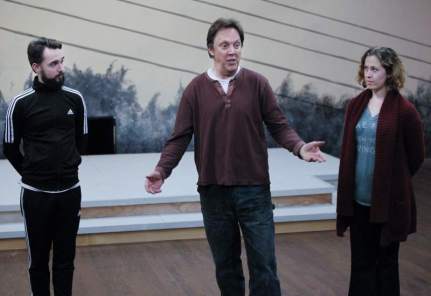 A rehearsal of Cinnabar Theater’s ‘Amadeus.’

“Salieri is a great villain.”

“Unlike Shakespearean villains,” he says, “who always eventually recognize their villainy, Salieri believes that he is the aggrieved party. He’s not the villain. He thinks he’s the victim.”

“This Salieri,” continues Pallaziol (who says he loves getting to address the audience directly in this play), “does believe that he is completely and totally right, that his actions are fully justified. That makes it so much easier to deal with, as an actor. It’s just nice for me to know that, no matter what awful things I do on stage, I am basically right.” 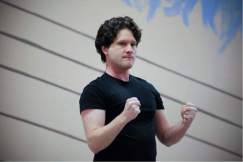 The celebrated play opens this weekend, and runs through April 15.

During a recent rehearsal, Pallaziol, Wilton and King are taking a break to sit down and describe their approach, as veteran theater artists, to one of the most powerful stage dramas of the 20th century. Directly in front of them is a simple, stripped-down set, with a large, wooden effigy of a piano hovering above the stage, an indication of the power and pull of music literally hanging over the characters’ heads.

“Jennifer’s approach, stylistically, is to keep the action clearly within Salieri’s mind,” explains Wilton, who says he’s avoided re-watching the movie so as not to have his interpretation of Mozart unduly influenced by Hulce’s indelible performance. “In our version, the facts and the memories and the scenes and the stories are all floating around in Salieri’s head space, which frees up a lot of us to become perceived versions of characters, rather than fight for some historical accuracy in our representation.”

Indeed, suggests King, this production takes special advantage of the poetry of the play. Shaffer’s actor-loving words don’t concern themselves so much with historical truths as much as they explore the ways art and music bring profound spiritual calm and mental comfort, while also (occasionally) driving that music’s creators to the very brink of madness.

“Both Mozart and Salieri experience mental breakdowns, of different kinds, and in this production, we get to see that,” says King. “This isn’t melodrama. It’s not over-the-top, like some productions of “Amadeus” have been. It deals with dramatic complexities in a really powerful and beautiful way.”

Asked what motivates these characters to such extreme behavior, the actors muse a moment before Wilton answers first.

“Well,” he says, “I hate to apply a contemporary term, but I think Mozart was probably bipolar, to some degree. He has major highs and incredible lows, and he fluctuates between the two. That’s the approach I’m taking, that he was the product of a very difficult upbringing, and that his mental state has been somewhat torn apart. That’s more interesting to me than the easy labels of ‘arrogant’ or ‘pompous’ or ‘A-hole’ or whatever. I’m trying to be psychological honest with this character, who really does change his emotions from moment to moment, and sometimes from line to line. It’s so much fun.”

For Pallaziol, Salieri’s motivating drive is his anger at having finally recognized that the world is not fair.

“That’s what it comes down to, for me,” he says. “Salieri craves fairness, but never finds it. He asks the audience, ‘Why does God grant genius to people who morally don’t deserve it?’ If our religion tells us that we must be morally good in this life, then why ­— having worked so hard to live morally — has that not been rewarded with the kind of genius that Mozart has? It’s not fair. And in the end, it drives Salieri to try and balance the scales, to finally take fairness into his own hands.”

So, one final question must be asked.

Did Salieri, does the cast of “Amadeus” think, really kill Mozart?

Having spent so much time with these characters, what answer might they have regarding that age-old mystery?

In response, the trio laughs happily (if a bit darkly), but it is King who finally answers.

“You’ll just have to come see the show,” she says, “and make up your own mind about that.”